From Overwatch Wiki
(Redirected from Accretion)
Jump to: navigation, search

Sigma is a Tank hero in Overwatch.

Sigma is an eccentric astrophysicist and volatile tank who gained the power to control gravity in an orbital experiment gone wrong. Manipulated by Talon and deployed as a living weapon, Sigma’s presence on the battlefield cannot be ignored.

1 second when recalled
5 seconds if destroyed
Type
Ability
Sigma propels a floating barrier to a location of his choosing. He can retrieve the barrier at any time.
Health:
900
Healing:
Regenerates 120 barrier health per second, after being down for 2 seconds
Projectile speed:
16.5 meters per second
Max. range:
∞
Area of effect:
4.5 meter height; 5 meter width at the poles, curves to 7 meters in the middle
Cooldown:
1 second when recalled
5 seconds if destroyed
Hold to propel a floating barrier; release to stop. Press again to recall the barrier to you.
Details:

Area of effect
Unleashing his full powers, Sigma takes flight, lifts enemies in a targeted area, and launches them into the sky before slamming them back down.
Damage:
50 damage (lift)
50% max HP (slam)
Move. speed:
7.15 meters per second
Max. range:
35 meters
Area of effect:
7 meter radius
Casting time:
0.6 seconds (intro)
1 second (lift)
Duration:
Up to 5 seconds to select the area
2 seconds (lift)
0.6 seconds (high gravity)
Ultimate cost:
1960 points
Manipulate gravity to lift enemies into the air and slam them back down.
Details:

Sigma is a Tank Hero boasting both consistent offensive and defensive abilities. However, his lengthy cooldowns requires one to think ahead rather than freely using his abilities. While he is capable of high damage output, he is most useful when fighting at a distance with Accretion and Hyperspheres while making openings and defending his team with his versatile Experimental Barrier. Quick thinking and superb situational awareness is needed when using Kinetic Grasp to protect himself and his team.

Sigma's abilities can give off the perception that he is stronger than he is, which can make it tempting for players to play overly aggressive with him. While Sigma has the capability to deal a lot of damage, his lack of mobility will make any situation where you're stranded alone and surrounded by enemies a disaster. Overextending with Sigma will in most cases result in dying a swift death; likewise, if you believe your teammates are nearby but they've already fled from a fight, you're just as likely to be eliminated. With that being said, Accretion and his Hyperspheres can quickly take out a singular escaping enemy, such as Lúcio or Tracer; in these cases, finishing them off before they can flee is the correct play. Being able to distinguish when it's a good time to push forward and when it's better to stay behind your team will be instrumental to the survival of both yourself and your team.

"There is no obligation from the universe to make sense to you."

Fantastic astrophysicist Dr. Siebren de Kuiper's life changed forever when an experiment gone wrong gave him the ability to control gravity; now, Talon manipulates him to their own ends.[2]

De Kuiper is mentally damaged. He thinks about the universe, gravity, and physics all through the same 'prism', seeing them as being akin to music.[3] He has high regard for the work of Mei-Ling Zhou, finding it "brilliant."[4]

De Kuiper works on his theories

A brilliant astrophysicist[5] Dr. Siebren de Kuiper was considered a pioneer in his field. His life's work involved devising a way to harness the power of gravity. Equally known for his groundbreaking research and eccentric personality, he conducted most of his studies from his lab in The Hague.[2] At some point he was present at the Horizon Lunar Colony.[4]

Decades of study and research led De Kuiper to the belief that "gravity is a harness;" if the unifying theories were correct, through his work mankind would soon even be able to command nature's most potent expression of gravity, a black hole, and it would change everything forever. Believing that he was close to achieving his goal, he performed his most important experiment on the International Space Station. However, something went terribly wrong. The field containing the experiment began to fail; as De Kuiper desperately tried to figure out why it was happening and how to stop it, the brief formation of a black hole was triggered. Screaming, De Kuiper was only exposed to its power for a moment, but he suffered serious psychological damage. The area around him began to experience strange fluctuations in gravity, peaking and dropping in time with his reactions. He had to be evacuated immediately.

Upon returning to Earth, De Kuiper was quarantined in a secret government facility. Between his ravings about the patterns of the universe, the psychic damage he sustained, the gravitic anomalies happening around him, and concerns for his mental wellbeing, he was deemed a danger to himself and others and detained for years under the name "Subject Sigma," with himself and his inexplicable abilities being researched. Isolated and unable to control his powers, De Kuiper retreated into his own mind. He thought he would never see the outside world again.

Sigma, now in the service of Talon

When Talon discovered De Kuiper's existence, they infiltrated the facility and broke him out, planning to use his brilliance and research to further their plans. In their custody, De Kuiper slowly gained control of his powers. Now, gravity moved according to his will, and he was closer than ever to achieving his life's goal. But the same experiment that had opened his mind had also fractured it, and he struggled to keep the pieces together. De Kuiper continued to develop his powers in hopes of unlocking the secrets of the universe, unaware that Talon was using both him and his research.[2] He spent most of his time working off-site in a lab Talon granted to him.[3] 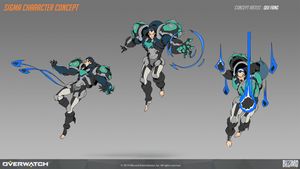 Blizzard began development of Hero 31 with the intent to further flesh out the Talon organization as well as to provide another barrier tank option in addition to Reinhardt and Orisa, both heavily requested by players. The creative team initially planned for Mauga to fulfill this purpose, and initially prototyped the hero dual-wielding rocket launchers, but found it difficult to convey how he would deploy his barriers with both hands occupied, and began to iterate on other concepts for his kit. In the process of developing Mauga's character for Alyssa Wong's short story, What You Left Behind, they decided that the kit being developed by Geoff Goodman and Joshua Noh no longer meshed with Mauga's violent, aggressive personality. 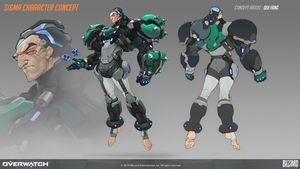 Rather than scrap the kit, which they found to be exceptionally fun, they pivoted and began developing a new Hero, who would become Sigma, to better reflect the more defensive and cerebral nature of the Hero's abilities. To that end, they brainstormed a physicist who would manipulate gravity, who could act as a tragic villain being manipulated by Talon without even realizing it, due to his psychological trauma, and began prototyping the character with concept artist Qiu Fang, initially using existing art. As a result of this pivoting, he was created on a tighter schedule than usual and was slightly delayed compared to previous heroes. The team consulted physics programmer Erin Catto, who holds a PhD in physics and wrote the physics engines for all of Blizzard's games, to make Sigma's physics references more scientifically accurate.

Blizzard has a campus in The Hague and as such has several Dutch employees both in Europe and North America, so they were able to consult with their employees on names and quotes, and incorporated a lot of Dutch influences into the character.[6]

Sigma was leaked four days before his official reveal on July 18th, 2019 by the Mexican blog post detailing the new role queue feature. That image was then tweeted by Team Mexico of the Overwatch World Cup.