Antonio Bartalotti, a.k.a. Antonio Giordani, was a corrupt businessman, arms smuggler, and high-level player in Talon, operating out of Venice, Italy.

Antonio was under surveillance by Blackwatch, wanted in connection with the operation of several smuggling operations focused on weapons proliferation throughout Europe. The extent of his connections to European government officials, law enforcement agents, and businessmen was unknown.[1]

Eight years before the present day, Antonio organized an attack against Overwatch in Oslo, Norway. In response, Gérard Lacroix established a Blackwatch facility in Rome as part of an operation to bring him down. However, an undercover Talon agent planted a bomb in the facility in an attempt to assassinate Lacroix; though Lacroix would survive the attack, dozens of Blackwatch agents were killed. Shortly after, Gabriel Reyes sought retribution for the incident, deploying himself, Jesse McCree, Genji Shimada, and Moira O'Deorain on a mission to capture and interrogate Antonio.[2] 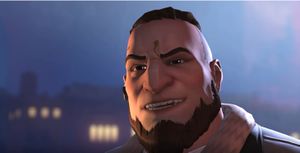 Once the agents broke into his office, Antonio stated that even if they captured him, his "friends" in government would have him out in less than a week. Reyes responded that Antonio was right and shot him, killing Antonio and sending his body flying through a window. In response, Antonio's manor went on lockdown, and the four agents had to fight their way out.[3]

In the aftermath of the assassination, power shifted within the Talon organization, allowing newcomers like Maximilien and Akande Ogundimu to rise through the ranks and fill the power vacuum. The incident also marked the start of Overwatch's decline, leading to its eventual disbandment.[3]