Ashe is a Damage hero in Overwatch.

Ashe quickly fires her rifle from the hip or uses her weapon’s aim-down sights to line up a high damage shot at the cost of fire-rate. She blasts enemies by throwing dynamite, and her coach gun packs enough punch to put some distance between her and her foes, or gain some air to leap to hard to reach places or for an aerial shot. And Ashe is not alone, as she can call on her omnic ally B.O.B. to join the fray when the need arises.

Ashe is a hero who requires good mechanical skill to be played effectively. Her weapon, the Viper, is quite powerful at long mid-range, particularly when the player uses her ADS (aim-down-sight) alternate fire. Dynamite is a dangerous, versatile ability that can be used to threaten space (such as narrow hallways and chokepoints) and deal decent damage in its radius, as well as inflicting a damage over time debuff. Uniquely, Dynamite can be detonated early by shooting it any time between when it's thrown and when its fuse runs out. Her Coach Gun serves as both a defensive "get-off-me" tool (like Lucio's Soundwave) and a potent mobility option (like Pharah's Concussive Blast). Finally, her Ultimate ability calls out her omnic sidekick B.O.B., who rushes in, knocks enemies in the air, and then grounds himself to shoot enemies, much like a turret.

Though dominant in midrange, Ashe suffers in close combat. Her primary fire, while quite fast, deals only mild damage, and Coach Gun is on a lengthy cooldown. Most of her abilities require good follow-ups, such as detonating Dynamite and making quick shots after jumping with Coach Gun. Dynamite can be rather tricky. While it deals impressive damage over time, it will also damage Ashe if she's too close to the blast. Overall, Ashe is best played close to her teammates, so she can have backup available if she is being harassed. B.O.B., though incredibly strong, can easily be countered by the enemy team, as he can be hacked, slept, and stunned in the same way he can be boosted by a friendly team.

Use B.O.B Smartly! Don’t just throw him into the enemy team: line B.O.B up for his cannon to do damage and delay them, as the enemy team can counter your B.O.B quite easily. The line of sight you are facing when calling out B.O.B is very important, as it can lead to B.O.B running clean off the map or into a unfavorable position.

Ashe is the ambitious and calculating leader of the Deadlock Gang and a respected figure in the criminal underworld.[1]

Ashe has an organized mindset. This affects her ideas of how her organization should be run, to how relationships should work.[2] Her relationship with Jesse McCree is "way more complicated" than a simple label,[3] though could be described as a "love-hate" type of relationship.[4]

Elizabeth Caledonia Ashe grew up in the American southwest[5] on a large estate.[6] Born into a wealthy family, Ashe grew up surrounded by privilege. Her parents were highly sought-after business consultants and coaches for powerful CEOs around the world. Though her parents paid little attention to her (mostly leaving her in the care of the family’s omnic butler, B.O.B.), they ensured that Ashe had every opportunity to succeed.[1] Because of their absence, Ashe grew to have a contentious childhood, getting into trouble at school, and spending her time shooting bottles on the family estate.[6] A loner, Ashe spent a lot of time talking to B.O.B.[2] (even if he was apparently incapable of talking back).[7]

As a teen/young adult, these demeanors led to being temporarily incarcerated.[6] A chance meeting with a local ruffian named Jesse McCree, and an impromptu string of crimes committed together opened her eyes to her true calling. The satisfaction of outwitting her targets and the thrill of getting away with it set her on the outlaw path.[1] Not only had she found something she enjoyed, she'd found something she was good at. As a criminal, the idea of making a name for herself appealed to her.[2] She and McCree never dated;[8] according to McCree, Ashe wasn't his type, as per her wealth.[4] McCree knew how to "push her buttons" better than anyone else.[3]

Ashe, McCree, and two others formed the Deadlock Gang.[2] She formed it out of a rebellious act against her parents, as given her wealth, she certainly didn't need the money.[9] Ashe started to make a name for herself with bigger and more extravagant heists.[1] While the Deadlock Gang wasn't the first gang to plague the American Southwest, Ashe declared that the gang would be "bigger and better" than its rivals, that they would "write their legend." Ashe found that she excelled as a leader—not only was she good at organizing heists and being a career criminal, but years of watching her parents coach and run their businesses had imparted her lessons on how to run a criminal enterprise.[2]

Leader of the Deadlock Gang

The gang's rapid rise to prominence put them at odds with the other criminal organizations in the American southwest; the encounters often became violent. After years of skirmishes and bloodshed, Ashe called the heads of the major groups together, seeing the potential to grow the influence of all. She used what she’d learned from her parents’ business to bring order to these groups. Her proposal was that the gangs could work together (or at least, not work against each other). Her principles: keep your word, don’t work with the law, respect each other’s territory, and always punish betrayal. No longer having to focus her energies on squabbles with the other gangs, Ashe began writing her name across the American Southwest with a string of audacious heists and operations that has placed her at the top of most-wanted lists and cemented her legacy as an outlaw legend.[1]

McCree ended up being captured in an Overwatch sting operation, and ended up joining Overwatch.[10] Following the news, Ashe kept a picture of McCree...on the dartboard of her hideout.[4]

Ashe on her heist

Years after McCree's departure, Ashe and the gang planned a heist of a hypertrain crossing above Route 66 at 11:55 AM, having received an anonymous tip that it was full of military ordnance. They destroyed the bridge, causing the train to plummet onto the road, giving them easy access to the cargo. While loading their hover dolly with the goods, however, the plan took an unexpected turn when McCree emerged from the dust. Hinting that he had sent the tip about the train knowing that she couldn't resist, all he wanted in return was a single crate, telling Ashe that she could have everything else. However, he refused to elaborate on what it contained. Becoming interested in what was inside after opening the crate and taking a look, Ashe prepared to drive off the disappointed McCree, which led to a standoff, and subsequently at the stroke of noon, a gunfight. Despite being outnumbered, McCree was able to hold his own, though Ashe and her crew managed to pin him down with their gunfire. However, McCree got the upper hand with a pack of grenades he found on the ground, shooting them mid-air and incapacitating the gang.

Upon waking up, Ashe found herself and her gang bound on their hover dolly. McCree activated it and sent it down Route 66, without any of their loot from the heist. Despite Ashe's yells, threatening to have B.O.B. rip off his other arm, McCree just ignored her.[11] Further down the road, having had time to cool down, Ashe bitterly reflected that she should have just shot him the moment he turned up. To add insult to injury, McCree zoomed past the dolly on Ashe's own hovercycle, ignoring (or not hearing) her as she shouted after him.[12] 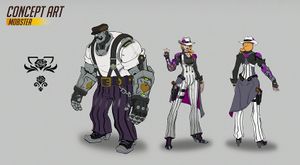 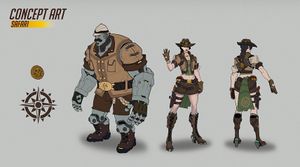 Ashe and the rest of the Deadlock Gang members were originally created for the Reunion animated short by project director Jason Hill and storyboard artist Mio del Rosario. At the time she wasn't intended to be a playable hero, but rather one of the enemies for McCree to battle, conceived as a female member of the Deadlock Gang with long white hair wearing a duster, wide-brimmed hat, and wielding a lever-action rifle, who would be accompanied by a giant omnic bodyguard and other gang members. During the storyboarding process they found the character to be exceptionally compelling, often coming to the forefront of scenes; realizing that there was something special about her, they decided to further flesh out her character design and backstory. Senior concept artist Jungah Lee produced several iterations of the character in order to hone in on a unique silhouette and color palette that conveyed her youthful appearance and outlaw nature without overlapping with the likes of Reaper and McCree, settling on a final design that married the Western cowgirl and biker themes. Lastly, they shortened her hair by giving her a unique asymmetrical bob, both to sharpen her silhouette and to avoid having to simulate flowing hair.[15]

At around the same time, Geoff Goodman and the game design team were interested in developing a new weapon-focused Damage hero, as the two other post-launch Damage heroes they released, Sombra and Doomfist, were both ability-focused. Upon seeing the early concept and storyboard art for the character, several designers independently came up with their own hero proposals, with the inclusion of B.O.B. being one of the only universally agreed upon ideas. Ashe's final kit revolved heavily around her lever-action rifle, deciding that, like McCree's similarly anachronistic revolver, it would be an extremely powerful, highly personalized weapon. To that end they gave it two firing modes, allowing her to rapidly fire from the hip for her primary fire, or to use iron sights with a reload between each shot for her secondary fire. Additionally, they gave the rifle a unique and satisfying reload mechanic, with Ashe reloading one bullet at a time in a dynamic loop that can be interrupted to resume firing. Her Coach Gun was designed mainly to create distance between her and her enemies, though it can also be used for mobility and trick shots. Ashe's Dynamite ability, originally conceived as a cluster bomb, was designed to be a versatile, high damage ability that is difficult to use.[15]

Her Ultimate, B.O.B., was very technically challenging to implement due to memory and performance restrictions, and almost resulted in Ashe being scrapped, as the team was adamant about B.O.B. being included as part of the hero. Unlike the AI-controlled turrets in the game, B.O.B. is treated more like an additional teammate, and can be healed, buffed, and debuffed accordingly, and can also capture or contest objectives. For a time the team experimented with having the game treat him as a full teammate, but ran into balance issues and bugs.[15]

Developer Comment: Ashe's full reload time felt overly restrictive. However, a long reload time is intended to balance out the power of her gun, so we want to be careful not to eliminate that completely.

Developer Comment: Our final technical audit on Ashe’s character package allowed us to implement a feature we talked about several times during Bob’s production. Making him part of Ashe’s golden weapon is a great way to celebrate our favorite Big Omnic Butler and let players show off their hard-earned Competitive Points each time they summon him onto the battlefield