Bastion is a Damage hero in Overwatch.

Repair protocols and the ability to transform between stationary Sentry, mobile Recon and devastating Tank configurations provide Bastion with a high damage output at the cost of mobility.

Bastion is a hero with two main forms. Its default form is a mobile bipedal form with a sub-machine gun, while the second being a completely immobile turret form. Both of these perform in unique ways, and must be utilized to their fullest. The most notable part of Bastion's kit is Reconfigure, which turns it into a stationary turret gun. This turret has some of the highest damage output in the game, being able to shred through shields and heroes alike, but it can't deal a critical shot. In tank form, while losing some damage output, it gets more crowd control ability, as the explosion of the shells fired are very large and dangerous to all enemies. However, Configuration: Sentry poses two major weaknesses to Bastion. The first is immobility, which causes Bastion to become an easy target to focus fire on. The second is a weak point that appears on its back in turret configuration. Faster heroes can easily get behind Bastion and kill it quickly with this weak point. Even though it has reasonable health and is able to repair itself in any situation, the healing ability has limits and its large frame makes it an easy target. Bastion is also relatively slow, making it easy to be outflanked by enemies.

Once a frontline combatant in the devastating Omnic Crisis, Bastion has all but lost its combat programming and now explores its surroundings, fascinated by the world and its inhabitants.

Though Bastion's new nature is gentle, its core combat programming takes over when the unit senses danger, utilizing its entire arsenal to eliminate anything it perceives as a threat. This has led to instances of conflict with the few humans it has encountered, and it tries to avoid populated areas in favor of the wild, uncharted regions of the world.[2]

Originally created for peacekeeping purposes, Bastion robot units possessed the unique ability to rapidly reconfigure themselves into an assault-cannon mode. But during the Omnic Crisis, they were turned against their human makers, forming the bulk of the omnics' rebel army. Following the resolution of the crisis, nearly all of the remaining Bastion units were destroyed or disassembled. To this day, Bastion units still symbolize the horrors of the conflict.[2]

Bastion was programmed with the mission to attack Stuttgart alongside many other Bastion units, but it was severely damaged during the fight. It lay dormant in the Black Forest near Eichenwalde, forgotten for over a decade.[2][3]

One day, Ganymede started to build a nest on Bastion's right shoulder, and discovered its visual sensory screen. Ganymede roused the unit by pecking on the screen. Bastion awoke remembering its directive -- Stuttgart. It began to make its way to the city, while admiring the beauty of the forest around it and forming a bond with Ganymede, offering an appropriately-sized twig for the nest. However, a woodpecker's drilling startled it, reminding it of gunfire, and it reconfigured itself into an assault-cannon and began to fire wildly, scaring off Ganymede and destroying the forest around it. Recomposing itself, it found Ganymede's ruined nest on the ground, realized what it had done and sadly continued toward its destination.

Bastion reverts to its old programming

In the meadow between the forest and Stuttgart, Bastion was looking back at the forest as it walked forward, and stubbed its foot on a destroyed Bastion unit, discovering it as one of dozens of other destroyed Bastion units scattered about the meadow. Bastion knelt beside the unit, its head torn open and memory components exposed, and accessed the fallen unit's last memories. Suddenly, Bastion was reliving the war, and saw its fellow Bastion units fighting German soldiers before being wiped out by Balderich von Adler. With new clarity as to its purpose, Bastion reverted to its combat protocol and again marched toward Stuttgart, ready to attack the city. Ganymede found it and landed on it, offering a twig in friendship, just as Bastion had done earlier. Bastion struggled with itself, and finally became peaceful again, placing the twig onto its shoulder, turning away from Stuttgart and back to the forest with Ganymede on its finger.[4] 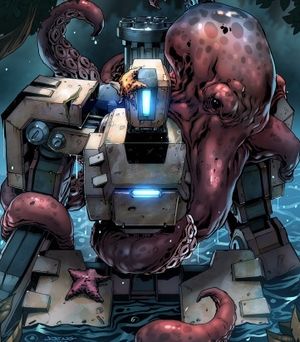 After Bastion's reactivation it was spotted in Sweden by some teens, who got scared when they sighted Bastion, as they thought that it would attack them. As the city's population assembled to discuss what to do, Torbjörn arrived, claiming that he could help with the issue, and asked for the citizens to stay in a safe place; however, a police officer was sent with him after they do some research on the stranger. He set up a trap for the omnic in a form of a ball-shaped rope bomb and his turret, but then Ganymede showed up and flew on top of the rope bomb, which startled the police officer, prompting him to fire his machine pistol, scaring away the omnic and Ganymede, which surprised Torbjörn as a Bastion unit normally couldn't be scared away.

Later on, he found the omnic near a beaver dam, and threw the ball near Bastion, but the omnic gave him a bunch of twigs as a response along with some beeps, making him realize that something is different with the unit. Soon after, the commando unit of the police started to attack Bastion, but it got away before they could do anything other than angering Torbjörn. After failing to restrain him, he detonated the rope bomb and left his attackers tied to the trees.

After restraining his opponents, Torbjörn went off in search of the omnic, and found it observing a flower. Speaking to the omnic, he declared to come in peace and promised not to hurt the omnic; Bastion offered him the flower as a sign of peace, and the duo continued on together.[5]

At some point afterwards, Torbjörn made new armor for Bastion.[6]

Alongside Tracer, Winston, and Torbjörn, Bastion watched an ad for Blizzard World.[7] 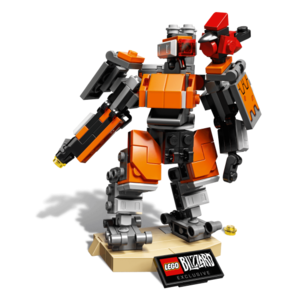