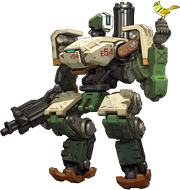 The Bastion Siege Automaton E54 is a type of omnic.

Standing at roughly four times taller than the average human,[1] Bastion robot units possess the unique ability to rapidly reconfigure themselves into an assault-cannon mode.[2] The Bastion remains equipped with a sub-machine gun in bi-pedal form.[3] It is immune to small arms fire, possesses a self-repair function,[4] and can access the databanks of other Bastion units.[3] They were programmed to fight against any odds until they were shut down.[4]

The E54 was originally created by SST Laboratories for peacekeeping purposes;[2] Torbjörn Lindholm was among those who worked on their creation.[4] During the Omnic Crisis, they were turned against their human makers, forming the bulk of the omnics' rebel army.[2] Even the world's best militaries had trouble dealing with them, and the Bastions never retreated in battle, simply advancing on the enemy until they were destroyed.[4] Following the resolution of the crisis, nearly all of them were destroyed or disassembled. To this day, Bastion units still symbolize the horrors of the conflict.[2] In the decades following the war, many false sightings of Bastion units were reported in Sweden and/or other European countries.[4] There is only one E54 Bastion unit still alive. This is the Bastion found playable in the game.