Moira is a Support hero in Overwatch.

Moira’s biotic abilities enable her to contribute healing or damage in any crisis. While Biotic Grasp gives Moira short-range options, her Biotic Orbs contribute longer-range, hands-off damage and healing; she can also Fade to escape groups or remain close to allies in need of support. Once she’s charged Coalescence, Moira can save multiple allies from elimination at once or finish off weakened enemies.

Projectile
Moira launches a rebounding biotic sphere; she can choose between a regeneration effect that heals the allies it passes through, or a decay effect that deals damage to enemies.
Damage:
50 per second, up to 200
Healing:
65 per second, up to 300
Projectile speed:
20 meters per second
5.5 meters per second while tethered
Max. range:
4 meters (damage orb)
5 meters (healing orb)
Duration:
7 seconds, or until depleted
Cooldown:
10 seconds
Headshot:
✕
Launch a bouncing sphere that either heals nearby allies or damages nearby enemies.
Details:

Moira is a support hero that can easily reposition amongst her allies with her immense mobility. Though

Biotic Grasp's healing isn't a lock-on, nor does it instantly reach the target, it can heal multiple allies simultaneously, granting her higher average healing per second when compared to other supports. However, this powerful healing is limited by a resource meter similar to D.Va's Defense Matrix; this meter refills very slowly over time, but Biotic Grasp's alternate fire refills it much faster, along with healing Moira herself.

Fade provides her a very strong movement tool and invulnerability that makes her very hard to lock down.

Biotic Orb can allow Moira to apply both damage and healing at the same time, and is very powerful in enclosed spaces where it will not simply fly past its targets.

Coalescence can both heal allies and damage enemies, but perhaps most importantly it can pierce barriers, preventing enemy tanks from blocking your ultimate with various shields. Her alternate fire gives her amazing sustain, particularly in 1v1 fights, and her

Fade gives her excellent escapes, greatly aiding her survivability against enemy flankers, though she remains weak to large burst damage such as enemy Snipers or Junkrat. Her kit, though very strong, lacks the utility other healers provide, making her focused though not particularly versatile.

"Science will reveal the truth."

Equal parts brilliant and controversial, scientist Moira O'Deorain is on the cutting edge of genetic engineering, searching for a way to rewrite the fundamental building blocks of life. Though O'Deorain will go to any lengths to make scientific breakthroughs, her work is still unknown to most of the world. But now that she has been freed from all constraints, it is only a matter of time before everything changes.[2]

O'Deorain has a negative view of Overwatch, claiming that it was responsible for stifling scientific advancement for decades.[3] She has no interest in global conquest,[4] but is willing to work with those who might have such a goal. [5] Her intellectual pursuits are driven by her interest in humanity.[4] She is a geneticist first and foremost, and that's the scope of her ambition. With very flexible morals, O'Deorain prefers to focus on her research and has no patience for those who urge caution or restraint.[5]

Her right hand is heavily scarred; it has been speculated that it is a result of experimentation or a genetic anomaly.[5]

Over a decade ago, O'Deorain made waves when she published a controversial paper detailing a methodology for creating custom genetic programs that could alter DNA at a cellular level. It seemed like a promising step toward overcoming diseases and disorders and maximizing human potential. Dissent among her peers soon followed. Many considered her work to be dangerous because of its perceived ethical shortfalls, and O'Deorain was even accused of having the same unchecked desire for scientific advancement that some believed had caused the Omnic Crisis. In addition, other geneticists were unable to reproduce the results of Moira's research, which further called her discoveries into question. Instead of kickstarting her career, her paper seriously damaged her reputation.[2] Overwatch was among those who condemned her research, and in O'Deorain's own words, tried to silence her.[3]

She received a lifeline in an offer from an unlikely source: Overwatch's covert ops division, Blackwatch.[2] She was personally recruited by Blackwatch's commander, Gabriel Reyes, who wanted someone who could help advise him on matters pertaining to genetics.[5] She continued her work in the shadows while developing new weapons and technologies for the organization.[2] Freed from her shackles, her genetic research greatly accelerated.[3] She had interactions with Blackwatch members Jesse McCree and Genji Shimada, all of whom had their likes and dislikes pertaining to each other.[5] Among her experiments was one done Reyes himself.[3] Her experiments on Reyes gave him super-human abilities, causing his cells to regenerate and decay at a hyper-accelerated rate.[6] Her employment was a closely kept secret.[2] 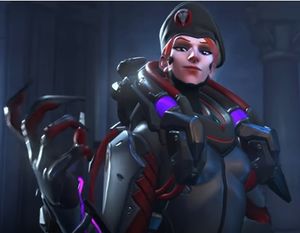 Eight years before the present day, O'Deorain took part in a Blackwatch mission to Rialto to apprehend Antonio Bartalotti, an Italian businessman with links to Talon. The team consisted of herself, Reyes, Shimada, and McCree. The Blackwatch team arrived in a Venice safehouse and set up survaillance on the manor. They found Talon soldiers patrolling the grounds. When night fell, they infiltrated the manor.[7] They made their way through its interior, killing and/or incapacitating numerous Talon guards. Upon reaching Antonio's office, they found him there, not surprised to see them. Nor was he intimidated, as he pointed out that Overwatch abducting a "respected businessman" would be a public relations nightmare. Furthermore, even if they did take him, his "friends" would have him released within a week. After some thought, Reyes said "you're right" and shot Antonio, the force of the blast sending him through his office window. It was the shot that stirred the hornet's nest, alerting Talon to their presence, leaving them with "Plan B"—fight their way out. In the ensuring battle, O'Deorain told Reyes that he'd done the right thing, and that he shouldn't apologize.

Despite numerous Talon soldiers attacking them, the team successfully exfiltrated the site. However, the events revealed the existence of Blackwatch to the world, resulting in political and public fallout.[8] In the inquiries that followed, O'Deorain's research was uncovered. Many high-ranking Overwatch officials disavowed all knowledge of her affiliation with them.[2]

O'Deorain, now a member of Talon

After Overwatch was disbanded, O'Deorain was forced to turn to unconventional sources of funding.[2] This time, she was invited to join the scientific collective that had founded the city of Oasis, and was selected to be their Minister of Genetics.[9] Yet some whispered that the shadowy Talon organization had already been supporting her for years, aiding her experiments in exchange for utilizing the results for their own purposes.[2] By the time of Doomfist's return to Talon (or after his return), Moira apparently had a seat on Talon's inner council.[3] O'Deorain's goals of pushing forward human evolution meshed well with Talon's, and she found a patron for her research in Doomfist.[5] 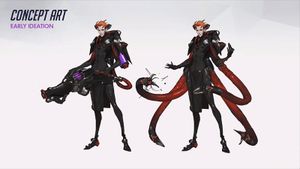 Moira's early ideation began with a combination of both gameplay and story ideas, stemming from strong player demand for a new support healer. Their initial goal was to introduce a shady, morally ambiguous healer to contrast with the existing "benevolent healer" archetypes already in the game.[9] The developers wanted her to have connections with various groups in the Overwatch setting.[5] Initial concepts gravitated towards a set of designs with a mysterious androgynous appeal, with the first iteration being outfitted with a set of four mechanical tentacles. Feeling that the tentacles would be difficult to incorporate into gameplay, they progressed to a more conventional, toned-down design with a two-handed spray cannon and began incorporating scientific apparatuses such as tubes and cannisters into her look, but felt that her silhouette became too similar to Zarya's. 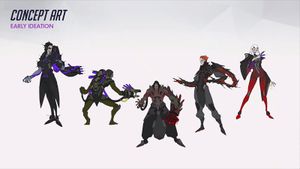 Thumbnails exploring different looks and weapons for Moira, including one inspired by the Omniblade (far right).

At this point they produced a number of thumbnails to experiment with different weapons and costumes while retaining her gaunt, androgynous appearance, with several that wielded various clawed gloves and gauntlets, as well as a concept inspired by Sombra's original Omniblade design, incorporating baggy sleeves and throwable syringes. The latter design also introduced the idea of a duality between her left and right hands, with one used to deal damage and the other to heal. Elements from these thumbnails were pulled together to create her final design, incorporating the earlier scientific details with a color-changing liquid to differentiate her healing and damage dealing abilities. 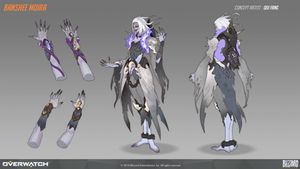 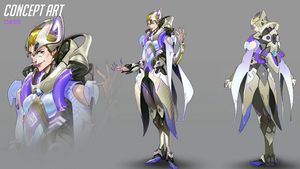 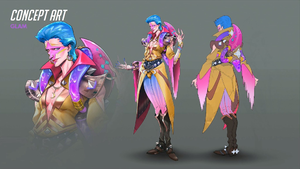 Moira's initial gameplay design involved her having a large health pool, which she would spend as a resource to heal allies while draining health from enemies, but it proved to be too difficult to balance. Early inspiration for her abilities may have been drawn from Overmind, a hero created for the original Prometheus pitch. In her final design, she instead uses separate Regeneration and Decay versions of her abilities, with her Biotic Grasp: Decay ability leeching health from enemies and enhancing the effectiveness of her Regeneration abilities. Because she is one of the few characters in the game to have both hands visible on the screen at all times, great care was taken with her animations to convey how these different abilities worked and reflected her design and personality. Her Fade ability was also designed to be similar to Reaper's Wraith Form, showing that the two characters are connected. The original version of her ultimate ability was a transformation that involved biotic energy swirling around her and gave her a beam that could both heal and damage, but as the beam was the most interesting aspect of the ability they decided to make it her ultimate's sole focus.[9]