Blackwatch was the covert ops division of Overwatch.[1]

Blackwatch's existence was kept a secret from the public, but there were always rumors of Overwatch carrying out black ops missions.[2] 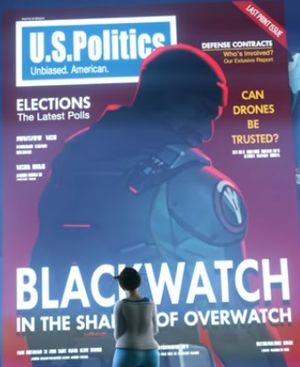 The existence of Blackwatch is revealed

Eight years before the present day, Gérard Lacroix had just newly established a Blackwatch facility in Rome as part of an operation to bring down Antonio Bartalotti, a high-level Talon affiliate based in Venice. However, an undercover Talon agent infiltrated the building and planted a bomb in an attempt to assassinate Lacroix; though Lacroix survived the attack, 14 Blackwatch agents and personnel were killed (or at least the ones that their remains could be recovered). Having avoided the explosion due to leaving the building moments earlier after meeting with Lacroix, Gabriel Reyes and Jesse McCree rushed back inside to rescue anyone they could find, with Reyes carrying out Lacroix.

Shortly after, Reyes sought retribution for the incident, deploying himself, McCree, Genji Shimada, and Moira O'Deorain on a mission to capture Bartalotti.[3] In what became known as the Venice Incident, they infiltrated Bartalotti's manor, killing or incapacitating numerous Talon guards. Upon reaching Bartalotti, Reyes ended up shooting him after being told that due to his connections, he could easily escape justice if brought in. The assassination set off the Talon guards to their presence, but the Blackwatch agents were able to escape with their lives. What they didn't escape, however, was the media scrutiny that came with it. The existence of Blackwatch was revealed to the world.[4] There were stories of assassination, coercion, kidnapping, torture, and worse. Governments called on the United Nations to shut down the "aggressive and repeated violations of many countries' sovereignty."[5] A special UN committee launched a lengthy and highly secretive investigation into the claims. As the UN investigation proceeded,[6] public distrust swelled.[5] The investigations revealed the existence of O'Deorain's illicit research within Overwatch, and the organization disavowed any knowledge of her.[7]

One year later, Blackwatch came under scrutiny after the Japanese government issued a complaint. The division and its agents were placed under suspension. While this was going on, the King's Row Uprising occurred. In violation of the suspension, Blackwatch agents, including McCree, scouted the area, and provided intel on Null Sector's fortifications.[8][9]

A year or less after the King's Row Uprising, Blackwatch was sidelined.[10]

As Overwatch's influence waned, people within Blackwatch sought to bring down its parent organization and turn it to their own ends.[1] In regards to Overwatch, governments called on the UN to put an end to the "aggressive and repeated violations of many countries' sovereignty."[2] This led a special UN committee to launch a lengthy and secretive investigation, which eventually led to the dismantlement of Overwatch, and therefore Blackwatch.[6]

Years afterward, McCree noted that tactics used by Talon seemed to be based on those used by Blackwatch, and one of the Talon soldiers recognized McCree, implying a connection between the two organizations.[11]