Blizzard World is a Hybrid map in Overwatch.

See your favorite gaming memories come to life in Overwatch’s new hybrid map as you attack and defend the payload across Azeroth, Tristram, the Koprulu Sector, and beyond![1]

The park was built in Irvine, California, and is themed around the worlds of Blizzard Entertainment.[3]

The map starts off with a payload in the Warcraft staging area. The defenders start in the Heroes Arcade, while attackers spawn in the Hearthstone Tavern. The attackers have to push the payload along into the StarCraft section of the theme park, which is a circular plaza with an upper level of bridges and walkways. Here, as with the Warcraft section, taking the high ground is the key to victory. The payload enters the Diablo area last, which consists of numerous smashable barrels.

Blizzard World has a number of attractions based around its universes. Its attractions are as follows (grouped by universe):

Heroes of the Storm[edit | edit source]

Use the hidden passageways to your advantage.

The payload moves very fast, try to keep 3 people on it while attacking. 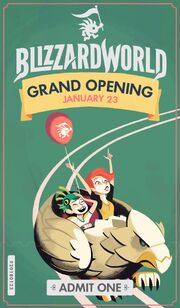