D.Va is a Tank hero in Overwatch.

D.Va’s mech, Tokki is nimble and powerful — its twin Fusion Cannons blast away with autofire at short range, and she can use its Boosters to barrel over enemies and obstacles, or absorb attacks with her projectile-dismantling Defense Matrix.

Projectile
While outside of her mech, D.Va can continue the fight with a mid-range automatic blaster.
Damage:
14
Projectile speed:
50 meters per second
Rate of fire:
7 rounds per second
Ammo:
20
Reload time:
1.45 seconds
Headshot:
✓
Example Video

Type
Ability (Mech)
D.Va can activate this forward-facing targeting array to shoot incoming projectiles out of the air.
Max. range:
10 meters
Duration:
Up to 2 seconds
(when fully charged)
Cooldown:
1.5 seconds
Block projectiles in an area in front of you.
Details:
Example Video

Melee
D.Va’s mech launches into the air, her momentum carrying her forward. She can turn and change directions or barrel through her enemies, knocking them back.
Damage:
10
Move. speed:
+118% buff
Max. range:
Up to 23.98 meters
Duration:
Up to 2 seconds
Cooldown:
4 seconds
Headshot:
✕
Fly in the direction you are facing.
Details:
Example Video

D.Va is a unique tank with some mobility. With very high health and Boosters, she can close a gap to the enemy with ease. She has high damage output at close-range, making her a strong fighter in a 1-on-1 match. Her Defense Matrix is useful against all incoming projectiles, protecting her teammates from enemy fire. The Micro Missiles deal high amount of damage when used in close range. She is a dangerous ganker in tank class, dealing consistent damage to the enemy. Self-Destruct will wipe all opponents within the blast area. However, she doesn't have an extended barrier to properly protect her team like Reinhardt. She is also slow while firing, allowing the enemy to outrun her to disengage or move around her to distract her aiming. Both Fusion Cannons and Micro Missiles are ineffective against anything further than medium-range, meaning she can be outranged by the enemy before she even has a chance to close a gap with Boosters.

D.Va is a former professional gamer who now uses her skills to pilot a state-of-the-art mech in defense of her homeland.[2] She is a very competitive individual,[3] and coupled with her pro-gamer skills, this makes her an extremely effective mech pilot. Never backing down, D.Va always plays to win.[4] While she projects a carefree, irreverant attitude, D.Va is burdened by the emotional cost of defending her homeland, and the facade the South Korean media projects on her.

In addition to skills as a mech pilot, D.Va is also a competent mechanic.[5]

Song on the e-sports scene

Hana Song grew up playing classic games with her father, himself a former professional gamer during his younger years.[6] He was the one that introduced her to StarCraft, and her undeniable skill helped lay the foundation for her eventual e-sports victories in other games.[7]

Song has been friends with Dae-hyun since childhood. They would stay up late working on his hoverbike. Hana took part in a race with it and won, albiet at the cost of the bike and nearly her own life.[5]

Like her father before her, Song became a pro-gamer. [8] She became a Mecha Guardian V player in high school, quickly ascending to the #1 rank, winning the world championship[5], surpassing her teammate Yuna Lee [6][9] and rival Kyung-soo Hann.[6] A fierce competitor, Song played to win at any cost, and gained a well-earned reputation for showing no mercy to her opponents.[2]

At home, however, not all was well, as MEKA struggled to maintain its defense against the Gwishin omnics that repeatedly attacked the nation. As the omnics continued to adapt, they eventually disrupted MEKA's drone-control networks, forcing the military to place pilots in the mechs. Scrambling to find suitable candidates, the government turned to the country's professional gamers, who possessed the necessary reflexes and instincts to operate the mechs' advanced weapons systems,[2] in addition to standouts from other fields that required similar talents. Top stars were drafted, including the 19-year-old Song,[3] along with Lee and Kyung-soo.[9][6] She saw the new mission as a game,[2] and an evolution of her own career. Without fear or hesitation, she abandoned the limelight of her pro-gamer career, and got an armored mech operator's licence. As a member of MEKA, she could put her reflexes to the ultimate test on a real battlefield, instead of a digital one.[3] Her skills and intense competitive spirit made her an extremely effective pilot.[4] 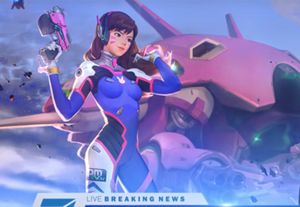 A MEKA poster of D.Va

Song now fearlessly charges into battle alongside the rest of her MEKA unit, ready to spring to her nation's defense at a moment's notice. Recently, she has begun to stream combat operations to her adoring fans, and her growing following has turned her into a global icon.[2] Sponsorship deals and her fanbase provided her with the means to customize her mech,[10] such as Nano Cola.[5]

At some point she also played one of the leading roles in the movie Hero of My Storm.[11][12]

As an active member of the military, Song was no longer able to freely travel as she could've as a civilian. She became an avid reader of Mei's Adventures, the publicly-posted travel journal of climatologist Mei-Ling Zhou, fascinated with all the different places Mei has seen.[13]

D.Va reflects on her burden

As time went on, the cost of defending South Korea from the Gwishin began to take its toll on Song. In one battle in Busan during a thunder storm, the squad barely managed to defeat the omnics, but the other mechs were put out of commision due to serious damage and their pilots sustained some injuries; only Song came out of it relatively unscathed. While the rest of the squad went on leave and the media reporting that Song was celebrating the victory by schmoozing with celebrities, Song had actually chosen to remain on active duty and spent time over the next week fixing and fine-tuning her mech alongside Dae-hyun, who had also joined MEKA as her assigned mechanic. As she stated that the squad and the rest of Busan were counting on her to keep the city safe, and any mistakes on her part could cost them everything, Dae-hyun recognized the emotional weight Song was carrying. He tried to convince her that she needed a break and that it was okay to ask for help, not needing to bear it alone, but she assured him that she had things under control.

That didn't last long however, as five Gwishin omnics returned to attack Busan—while previous attacks were spaced between months, this one was just one week, which left the pair the only ones present to defend against the omnics. Song launched her mech to engage them. She took out two of the Gwishin, but the remaining three outmaneuvered her, damaging her mech and destroying one of the fusion cannons. Dae-hyun told her to get to cover and wait for reinforcements, but Song stated that they wouldn't get there in time. Performing a 180 on the pursuing omnics, she managed to destroy two of them, while the last Gwishin broke off and headed for Busan. Song pursued it, but it avoided her weapons fire and micro missile barrage before turning around and entangled her mech, tearing off the other cannon when she tried to fire on it. Left without any weapons, all her status readouts in the redline, and the city still in danger, she realized she could do nothing else and asked for her friend's help.

With Dae-hyun going over the mech's status, on the mention of the reactor becoming unstable Song remembered their earlier conversation of the destruction of his hovercycle, and suggested purposely overloading the mech's reactor. After some protest, Dae-hyun obliged, and as Song distracted the omnic to buy him some time he successfully triggered an overload that would destroy the reactor in sixty seconds. The omnic would reach Busan before that however, so Song ejected from the mech and used her light gun to shoot the exposed reactor from afar, destroying both the mech and the omnic. She fell into the sea, where she was recovered by a search-and-rescue team and taken for medical treatment, Dae-hyun accompanying her.

South Korean media later made an update on the attack, reporting that authorities had stated that she had emerged without a scratch. In reality, she came out of the ordeal with a broken leg and arm, along with other more minor injuries. That didn't stop her from using her time off by assisting Dae-hyun with assembling her new mech. She thanked him for being there for her when she'd needed him.[5]

D.Va was first announced through the official PlayOverwatch Twitter account, which linked to a mock-up page on the official StarCraft II World Championship site.[19][20] She had previously been depicted in posters in the attacking team's starting area in Hanamura. Her StarCraft page was later taken down and the link instead redirects to the StarCraft II home page.

The StarCraft WCS web page first introduced D.Va as a former professional StarCraft player. Michael Chu later clarified on February 1, 2018 that this was not intended to be canon and was just a fun way to tease the character. He also explained that the unnamed game that she was best known for in her career was one that best matched the skills needed to pilot her mech.[21]

D.Va's design and kit seems to take inspiration from Brit, one of the hero concepts created for the Overwatch pitch meeting. 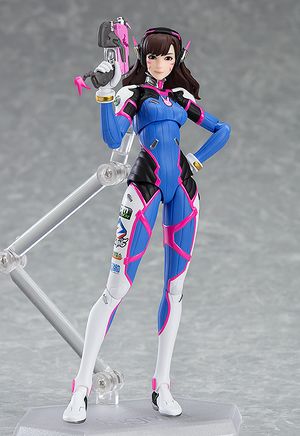