From Overwatch Wiki
(Redirected from Cyber-Agility)
Jump to: navigation, search

8 seconds
Type
Ability
With lightning-quick swipes of his wakizashi, Genji reflects an oncoming projectile and sends it rebounding towards his opponent.
Area of effect:
1 meter radius
(front only)
Duration:
2 seconds
Cooldown:
8 seconds
Deflect incoming projectiles towards the direction you are aiming and block melee attacks.
Details:
Example Video

Genji is a versatile flanker with very high mobility, boasting some of the best movement options of all the heroes. Genji is better suited for close quarters to make use of his mobility and spread shurikens, but can still be formidable at range. Cyber-Agility makes Genji a difficult target and allows him to navigate the map with ease. Swift Strike allows Genji to engage, escape, or move between targets efficiently. The damage on Swift Strike is considerable for most heroes but is insignificant to a tank. As such, Genji should use Swift Strike to either maneuver around his enemies or deal small but quick and easy damage. Deflect allows Genji to turn enemies' damage back towards them and even allows him to turn around entire ultimate abilities. This allows for potentially lethal burst damage if it is timed properly and Genji is well-positioned. Be wary when estimating your own abilities as Genji, though; you are not the most agile hero, nor do you deal the most damage. Genji fills a middle ground when it comes to these factors.

The cyborg Genji Shimada has made peace with the augmented body he once rejected, and in doing so, he has discovered a higher humanity.[4]

Genji's sword is a katana named Ryū ichimonji (竜一文字); he maintains it personally and has never allowed anyone else to examine or repair it. It is paired with a traditional wakizashi sheathed horizontally on his lower back.[5]

As the youngest son of Sojiro Shimada, the master of the Shimada ninja clan, Genji lived a life of luxury and privilege. He had little interest in the family's illegal businesses, and although he excelled at and enjoyed his ninja training, he spent most of his time pursuing a playboy lifestyle. Many within the clan considered the carefree Genji to be a dangerous liability, and they resented his father for coddling and protecting him. Following the clan leader's untimely death, the clan elders instructed Genji's older brother, Hanzo, to demand that Genji take a more active role in their late father's empire. Genji refused, enraging Hanzo. The tension between the brothers built to a violent confrontation that left Genji on the verge of death.

Hanzo believed that he had killed his brother, but Genji was rescued by Overwatch and the intervention of Dr. Angela Ziegler. The global security force saw Genji as a potential asset in its ongoing operations to combat the Shimada clan. As Genji's injuries left him clinging to life, Overwatch offered to rebuild his body in exchange for his help. He was put through an extensive process of cyberization, which enhanced his natural speed and agility and augmented his superlative ninja skills. Transformed into a living weapon, Genji single-mindedly set about the task of dismantling his family's criminal empire.[4] At some point he was stationed at Watchpoint: Gibraltar.[6] As a member of Blackwatch, he had mixed views on fellow members Jesse McCree and Moira O'Deorain.[7] 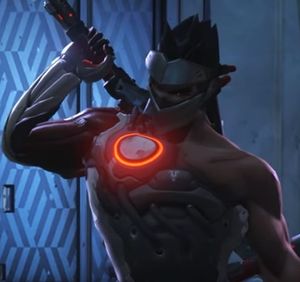 Eight years before the present day, Genji took part in a mission to Rialto in order to apprehend Talon member Antonio Bartalotti. The Blackwatch team arrived in a Venice safehouse and set up survaillance on the manor. They found Talon soldiers patrolling the grounds. When night fell, they infiltrated the manor.[8] They made their way through its interior, killing and/or incapacitating numerous Talon guards. Upon reaching Antonio's office, they found him there, not surprised to see them. Nor was he intimidated, as he pointed out that Overwatch abducting a "respected businessman" would be a public relations nightmare. Furthermore, even if they did take him, his "friends" would have him released within a week. After some thought, Reyes said "you're right" and shot Antonio, the force of the blast sending him through his office window, setting off an alarm. Genji remained silent, even as they engaged in "Plan B"—fight their way out. During the escape, Genji voiced support for Reyes's actions, stating that the commander had found an "expedient solution." He noticed that McCree was uneasy about what had occurred, pointing out that they'd killed before. Reyes stated that what had happened was an execution. Genji simply responded "dead is dead." He further stated that he felt no sympathy for the Talon guards.

The team succeeded in exfiltrating the manor, but the existence of Blackwatch was revealed to the world, resulting in political and public fallout.[9]

Seven years before Overwatch's disbandment, Genji was apparently a member of Blackwatch. While Null Sector carried out an uprising in King's Row, he trained with Lena Oxton.[10] Genji would later comment that Tracer was "the only one I have trouble keeping up with."[11]

Within a year after the King's Row Uprising, Blackwatch was sidelined. Genji cut contact with his old team members.[12] 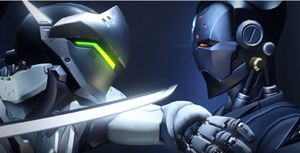 Six years before the present day, under the command of Sojourn, Genji took part in an operation in Havana consisting of himself, Mercy, Winston, and Tracer. Their objective was to apprehend Maximilien, who was travelling through the city in an armored convoy. The Overwatch team engaged, with Genji using his sword to disable Maximilian's vehicle, and his shuriken to destroy a pair of others. Maximilian fled on foot, but the team was able to catch up with him, Genji putting his sword to the omnic's neck. In exchange for leniency, Maximilian agreed to arrange a "meeting" with Doomfist,[12] informing them that Talon's leader would be in Singapore in three weeks.[13]

Three weeks later alongside Tracer and Winston, Genji confronted Doomfist in Singapore. He initially attacked Doomfist with his shurikens, but the man either deflected them with his gauntlet, or utilized a powerful shield to keep them at bay. Doomfist slammed his gauntlet into the ground, sending pillars of earth upwards, forcing Genji to jump into the air for safety. It was the opening that Doomfist needed, as he jumped up and hit Genji with his gauntlet, sending him skidding along the streets and smashing into a car. Genji's cybernetic body began to give out, but luckily, Winston was able to defeat Doomfist shortly afterwards.[14]

When Winston issued a recall of Overwatch agents, Genji was seemingly in western North America.[15] 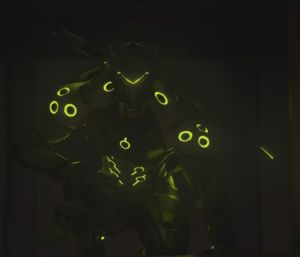 At some point after the recall, Genji headed to Japan to confront his brother. He contacted Angela Ziegler, informing her of his decision.[16]

On the tenth anniversary of Genji's supposed death, as he had done every year, Hanzo broke into Shimada Castle and took down the guards before they could alert anyone. In the main room in front of the sword display he lit an incense offering and prayed to honor his brother. Genji had tracked him before he even set foot in the castle, and revealed his presence to Hanzo. The two sparred both physically and verbally, discussing Hanzo's assassination of his brother. Hanzo unleashed his Dragon Strike ability, but Genji was able to manipulate it, a feat that only a Shimada should be capable of. He took off his mask, revealing himself as Hanzo's very much alive brother. He told Hanzo that he had forgiven him, and now, Hanzo had to forgive himself. The world was changing, and they would have to pick sides. Hanzo wasn't swayed, but Genji told him that he still had hope for his brother. And with that, he disappeared into the night.[17] 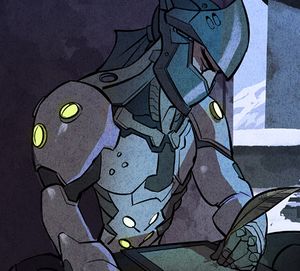 At Christmas, Genji was with Zenyatta. He wrote a letter using a quill. The letter was possibly sent to Mercy, who received a letter with an identical quill (if not the same one) that Genji had used.[18]

Some time after Winston's recall, Genji arrived on location to Paris, where he aided the newly-refounded Overwatch in repelling Null Sector's forces after the opposition began pushing them toward an early retreat. After playing a crucial part in crippling and taking down the terrorist organization's giant Omnic, Genji rejoined Overwatch, alongside Reinhardt, Brigitte, Mercy, and Echo.[19] He was willing to work with Overwatch, at least in the short term.[11] 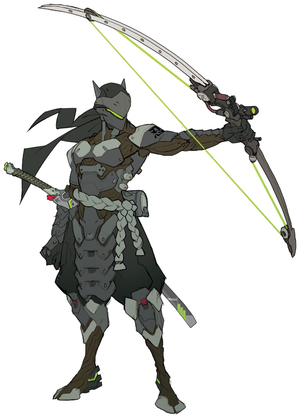 Genji and Hanzo were originally envisioned as a single cyborg ninja hero named Hanzo who wielded both a bow and a sword, used parkour, and had an assassinate ability, using artwork for the Assassin class from the cancelled Project Titan.[29] They were split into two distinct heroes early in development.[30] During development Hanzo was known as "Bow Ninja" and Genji as "Sword Ninja."[31] Both Genji and Hanzo's kits drew heavily from an early version of Sombra that predated both heroes, which resulted in the Sombra concept being temporarily shelved.[32]

Genji himself was originally conceived as a slow-moving stealth assassin with an ability that allowed him to trip an enemy, stunning them, and then instantly kill them with a sword strike "finishing move" if another enemy didn't interrupt the attack, but this design was found to be unfun.[33] At one point he was also given an Ultimate that would allow him to instantly kill an enemy from behind, which would have had unique stealth kill animations such as stabbing them in the back or cutting their throat.[34] The lessons learned from this iteration of Genji were taken into consideration when developing Sombra as a stealth hacker.[32] Another early version of Genji was treated purely as a melee hero with his sword always drawn and the ability to stick to walls.[35] Some of these abilities appear to be the basis for the Talon Assassin enemy unit that appears in the Overwatch Retribution event.[36]

The concept for Genji's new design in Overwatch 2 originated from the first storyboards for the Zero Hour cinematic, which depicted Genji appearing in a hoodie to rescue Winston. In the original storyboards he was wearing only a hoodie, causing the art team to realize that Genji had been naked this whole time and decide that if he's going to wear a hoodie he should also put on some pants. Jungah Lee, a concept artist for the Story and Franchise Development team, took that idea and fleshed out the design for the cinematic, and the development team liked it so much that they decided to bring it forward as his new design.[37]