From Overwatch Wiki
(Redirected from Damage)
Jump to: navigation, search

Each hero fills a different role in Overwatch.

Tank heroes soak up damage, create space for your team, and break apart fortified positions, like closely-grouped enemies and narrow choke-points. If you’re a tank, you lead the charge.

While Roadhog lacks a barrier to absorb enemy attacks, his Take a Breather ability reduces incoming damage by 50% while healing back half of his health, allowing him to survive soaking up large amounts of damage. This leaves the door open for his teammates to pick off distracted enemies and for Roadhog himself to single out enemies with his Chain Hook. While he excels at staying alive, his lack of ability to actively protect his teammates tends to cast Roadhog as a secondary tank, preferably while his team is attacking an objective rather than defending.

Wrecking Ball offers very little protection to the team, making him weak when defending. Unlike other Tanks, he is not meant for long engagements, with his only protection ability, Adaptive Shield, having a long cooldown and a relatively short duration. Instead, Wrecking Ball's role is to disrupt the enemy team with Piledriver, or to simply deny space with Grappling Claw or Minefield. This makes Wrecking Ball an extremely aggressive Tank.

Zarya has a smaller health pool than the other tanks, no armor, and is incapable of protecting multiple members of her team. However, her ability to project barriers onto one ally at a time can help her and her teammate survive large bursts of damage while dramatically improving her firepower. Because of the lack of defense she offers to the team, especially in comparison to Reinhardt or Winston's barriers, she is often picked as a secondary tank, mostly to provide some additional close-range, sustained damage. She is most effective when used in and around cover, taking limited bursts of damage at a time and relying on her shield to regenerate between exposures. Zarya is a unique tank because of her regenerating hitpoints, which allows her to work effectively by herself as a proxy-positioned (offside) harassment, not requiring constant healing and only needing line of sight to her team to be able to provide barriers when needed.

Damage heroes are responsible for seeking out, engaging, and defeating the enemy using their varied tools and abilities. Playing a damage hero means it is your duty to secure kills.

Due to her self-sustain and utility abilities, as well as her relatively low damage output, Mei is often considered a Damage/Tank hybrid, focusing less on damaging incoming enemies and more on guarding choke points. She is effective at contesting an objective, rendering many opponents' ultimate abilities useless and can excel at setting up enemies for easy pickings by her team's damage dealers.

Sombra deals less damage and requires good tracking. She substitutes the burst damage of her fellow Damage heroes in exchange for incapacitating key targets with Hack for her allies to swarm. She's far less self-sufficient than other Damage heroes, relying on team coordination and communication to operate at her strongest. She is often considered a Damage/Support Hybrid.

While Symmetra has the potential to output tremendous amount of damage when fully charged, she is often picked for her utility role instead. Her turrets are effective at slowing down mobile targets and disrupting the enemy team, while her teleporter is useful for providing mobility to traditionally immobile heroes in addition to allowing unorthodox strategies exclusive to her kit. Much like Sombra, she lacks self-sufficiency compared to the other damage heroes and requires a highly coordinated team to reach her highest potential. She is also often considered a Damage/Support hybrid.

This role was introduced in the June 5, 2018 Patch by merging the two roles that existed before: Offense and Defense. Doomfist, Genji, McCree, Pharah, Reaper, Soldier: 76, Sombra, and Tracer belonged to the Offense category, while Bastion, Hanzo, Junkrat, Mei, Torbjörn, and Widowmaker belonged to the Defense category. Prior to the release of her second rework, Symmetra was also intended to switch from Support to Defense. Blizzard gave the following explanation of their decision to merge these categories into one: "Since the line between Offense and Defense heroes has become increasingly blurred, we’ve decided to group all those heroes into a single new “Damage” category. We believe that the term more closely matches the role name that is now being used in Overwatch League and across most of the game’s community."

Support heroes empower their allies by healing them, boosting their damage, and providing vital utility. As support, you’re the backbone of your team’s survival.

Lúcio and Zenyatta both provide low amounts of healing compared to the other supports. As such, they may find it difficult to keep their teammates healthy over the course of long fights. They are fortunate that, unlike many other support heroes, their healing isn't on any type of cooldown, and so is difficult to interrupt. However, they make up for this deficit with more powerful and more readily available utility, in the form of Speed Boost and Orb of Discord, respectively. In addition, their Ultimate abilities are exceptionally powerful, and can save their allies from multiple enemy Ultimates or as a way to engage the enemy team, if used properly.

Conversely, Moira offers very little direct utility for her team, only having access to high healing and low, but consistent, damage. However, her survivability can make up for this, as she can escape many situations that the other support heroes would likely die in. It's important to remember that a live support with no utility is more useful than a dead support with tonnes of utility.

Furthermore, Brigitte provides valuable offense when in need, while providing heals to both targeted individuals and anyone around her with her passive healing on hit. This "carefree" healing allows Brigitte to focus on using her abilities to stun, displace and kill certain heroes while providing sufficient healing to her nearby teammates. 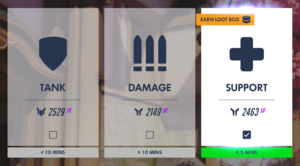 An example of separate SR for each role

Role queue was added on August 13th, 2019, for Competitive Play, and on September 3rd, 2019, for Quick Play. Players first select 1 or more roles before queuing, and once in a game, players can only pick heroes within a single role. Players have separate SR for each of the three roles.

To encourage unpopular roles—usually tank and sometimes support—incentives are added in the form of 1 loot box per day for playing as the role, and 25 credits for each game after. Loot boxes gained this way are normal loot boxes, and contain no seasonal cosmetics.

Although role queue has standardized the game and prevented instances in which teams do not have any tanks or supports, it has drastically increased the time it takes to find a game, especially for the damage role. As a result, the While You Wait featured was introduced on December 10th, 2019, to allow players to use the training room and play specialized game modes while waiting.

To try and reduce the time spent in queue searching for a game, an Experimental mode, dubbed Triple Damage, was trialled from February 25th to March 3rd, 2020, which increased the number of Damage heroes per team from 2 to 3, while the number of Tank heroes decreased from 2 to 1. According to Jeff Kaplan[1], queue times for Damage heroes were drastically cut, but community responses seemed mostly negative, and none of the changes in Triple Damage were introduced to the other game modes.

Prior to role queue, Blizzard has previously attempted to standardize team compositions by allowing lock role with the Looking for Group feature.