Difference between revisions of "Doomfist"

Doomfist is a Damage hero in Overwatch.

Shotgun (projectile)
Doomfist fires a short-range burst from the knuckles of his fist. Its ammunition is automatically regenerated over a short time.
Damage:
1.8 - 6 per pellet
19.8 - 66 per shot
Falloff range:
15 meters to 30 meters
Spread angle:
Constant: 2.15 degrees
Projectile speed:
80 meters per second
Num. of pellets:
11 per shot
Rate of fire:
1 shot per 0.333 seconds
Ammo:
4
Reload time:
0.65 seconds (per shot)
Headshot:
✓
Details:

Doomfist is a close-combat fighter who excels in taking down enemy targets with his combos. With his signature ability Rocket Punch, he can secure an instant kill on a non-tank hero by knocking them into a wall. Rising Uppercut not only deals damage but also enables Doomfist to secure higher ground. Seismic Slam is another dual-purpose ability that both provides additional mobility and deals damage based on time spent in the air. After casting Meteor Strike, Doomfist becomes invulnerable while choosing his landing location and then drops down, dealing damage in a large area. The Best Defense... helps him to mitigate punishment from the enemy team as long as he can continue dealing damage. While Doomfist is strong up close, his damage falls off at mid- to long-range. Unless he can close the distance between himself and an enemy, his only option is to use Hand Cannon, which typically is better used as a finisher than as a primary weapon due to its long reload time and relatively low damage. Doomfist is a high-risk, high-reward hero - while his large burst damage can be used to easily pick off high-priority targets, he typically takes more damage than other heroes due to his large hitbox.

Recently freed from imprisonment, Doomfist is determined to plunge the world into a new conflict that he believes will make humanity stronger.[1] He possesses great strength and agility himself, even without his gauntlet.[2] 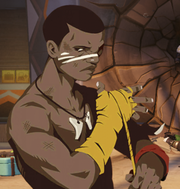 Adeyemi was a useful asset to Talon, but the organization saw far greater potential in Ogundimu, with his intelligence and his ability to inspire as a commander. While Adeyemi was content to profit from raids on Numbani, Ogundimu had a grander vision.[1] After the Venice Incident,[3] this difference in aspiration would lead Ogundimu to kill his teacher and take on the mantle of Doomfist, along with the eponymous gauntlet.

As the new Doomfist, Ogundimu rose high in Talon and helped to orchestrate a conflict that the organization hoped would someday engulf the world.[1] Some of Talon's leaders began to get sloppy as Doomfist's rise throughout the organization disrupted its hierarchy.[4]

Six years prior to the Overwatch Recall, while Hurricane Fernand ravaged the Caribbean, Doomfist held a clandestine meeting with an omnic terrorist in Cairo, offering to pledge Talon's considerable resources to their cause. Unbeknownst to Doomfist, his accountant Maximilien was cornered by Overwatch agents in the Havana Sea Fort as the storm reached Cuba. In exchange for immunity and anonymity, Maximilien informed on his employer, divulging that Doomfist would travel to Singapore in three weeks.[4]

Doomfist shortly before his defeat

Doomfist's plans reached a snag when he was confronted in Singapore by an Overwatch strike team consisting of Winston, Tracer, and Genji. The resulting battle turned part of the city into a warzone. Doomfist was able to incapacitate both Tracer and Genji, as he blocked their projectiles with his gauntlet and a shield that surrounded his body. Winston however, engaged him in close quarters in a battle of strength.[2] A battle that Doomfist lost.[5] After his defeat, he was imprisoned in a maximum security installation managed by Helix Security International for years, where he waited patiently for events he had incited to play out.[1] While imprisoned, Doomfist kept up to date on the events of the world outside his cell, collecting newspaper clippings about his defeat at the hands of Winston, Overwatch's possible return after its disbandment, the opening of a Doomfist exhibit displaying his gauntlet, and the assassination of Tekhartha Mondatta.[2] 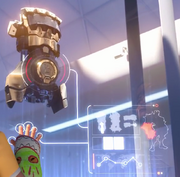 During his time in prison, his gauntlet was put on display in an Overwatch Museum;[6] Doomfist became aware of this via another newspaper clipping.[2] At some point, Talon agents Widowmaker and Reaper tried to retrieve the gauntlet from the museum, but were fought off by Winston and Tracer. Doomfist's gauntlet was used by a bystander, Brian, to help drive the Talon operatives away.[5]

In the early hours of the morning, a Talon aircraft entered the Helix security installation holding Doomfist, bypassing their defense systems without incident. Reaper emerged from the craft and broke into the facility, killing over a dozen guards in the process of freeing Ogundimu.[6] Doomfist was able to punch his way out of his own cell during the extraction.[2] It is believed that other security breaches took place within the facility, though Helix officials have not confirmed whether other inmates or items were taken. Helix lost track of Ogundimu following his escape.[6]

Following his escape, Doomfist and Reaper discussed recent incidents carried out by Talon, including the failed assassination attempt on Katya Volskaya under Vialli's orders and the assassination of Mondatta by Widowmaker. He then travelled to a casino in Monaco with Widowmaker and Sombra to meet with another member of the organization's inner council, Maximilien, who reaffirmed his loyalty to Doomfist's cause and warned him of rivals within the organization who were unhappy with his return. There he and Widowmaker were attacked by Vialli's men, though the pair defeated them easily.[7]

Doomfist, Reaper, Sombra, and Widowmaker later attended a masquerade ball in Venice, Italy, which was being used as cover for a clandestine meeting of Talon's leadership. While his cohorts eliminated security and other targets, Doomfist confronted Vialli on a bridge. Though Vialli claimed that there was nothing personal behind his actions and that he was simply looking out for the well-being of the organization, Doomfist threw him from a bridge to his death, declaring that Talon is not a group of criminals concerned only with profit. Doomfist and Reaper then entered a secret boardroom where they met with Maximilien and other members of the inner council to discuss his plans to start a new war.[7]

Having sent Talon on a course correction (in his eyes), Doomfist began gathering people around him who he could trust. People he could believe in.[8]

Some time later, Doomfist traveled to Numbani to recover his gauntlet, which was being transported to the city's Heritage Museum for a Doomfist exhibit as part of their Unity Day celebration. Confronted by a team of newly-introduced OR15 defense robots, Doomfist easily defeated them in the Adawe International Terminal of the Numbani airport, reclaiming his gauntlet,[6][9][1] ready to take revenge on the Overwatch organization that had imprisoned him for years.[10] He sought to spread discord between humans and omnics. He began rallying his forces, and Numbani's military was powerless to stop him.[11]

Doomfist is a rare example of a hero that began as nothing more than a name — Chris Metzen offered it as the first suggestion in a brainstorming session for random villain names. With only a general notion of who or what the character would be, Doomfist's gauntlet was created as a MacGuffin for the Blizzcon 2014 Overwatch announcement cinematic, and a rough prototype sketch of the character was designed, with the intention of fleshing it out and developing him into a full character at a later date.[12] An early version of this design would even appear in the initial hero lineup key art, alongside other prototype heroes such as Wildebeest and Recluse. After his gauntlet featured in the announcement cinematic and references were made to him in Numbani, it was decided to make him a "generational character," similar to comic book heroes that take up the mantles of their predecessors; Metzen has used The Flash and Green Lantern as examples of this concept.

Doomfist's kit was developed as a love letter to classic 2D fighting games, and care was taken to replicate the look and feel of special moves in those titles. A strong emphasis was also placed on making his attacks feel strong and impactful through visual and audio cues, and colors like red and gold were chosen for his design to convey a regal presence, while his gauntlet was created to "look as badass as possible from every angle," and to deliver pneumatic, impact-driven movements that would look and feel physical rather than magical. Extensive cybernetic augmentations were added to his body, contributing to his overall menacing appearance. His animations were designed to convey his strength and confidence, with the idea that each of his movements is carefully calculated. This idea also carried through to gameplay, with the way his abilities can be linked together to form combos that suit the player's current situation.[12]