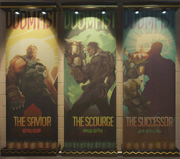 Poster of three generations of Doomfists in Numbani. 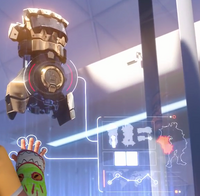 Each Doomfist has wielded a powerful gauntlet. The first, Adhabu Ngumi, became known as the Savior, though little is known about him or his exploits. The second Doomfist, Akinjide Adeyemi, was a war profiteer and member of the Talon mercenary organization who became known as the Scourge of Numbani.

The third Doomfist, Akande Ogundimu, was a former professional martial artist and the heir to his family's cybernetics company. Following an injury that cost him his right arm and ended his fighting career, Ogundimu was approached by Adeyemi, who hired him as a mercenary and eventually brought him into the Talon organization, acting as his mentor. Ogundimu's natural intelligence and leadership abilities, as well as his physical prowess, allowed him to quickly rise through the ranks of the organization. In time his aspirations would lead him to kill Adeyemi, claiming his gauntlet and the Doomfist title as his own. Thereafter he became known as the Successor.

During a Talon initiative to plunge the world into a global war, Ogundimu was defeated by an Overwatch strike team lead by Winston. Ogundimu was imprisoned in a maximum security facility operated by Helix Security International, and his gaunlet was put on display in an Overwatch Museum. Later, Widowmaker and Reaper tried to retrieve the gauntlet, but were fought off by Winston and Tracer; Doomfist's gauntlet was briefly used by a bystander, Brian, to help drive off the Talon operatives.[2]

An exhibit on the Doomfist legacy was opened in the Numbani Heritage Museum for one of its Unity Day celebrations,[3] and Doomfist's gauntlet was transferred to the city.[4]

Some time after Overwatch's recall, Doomfist was freed from the Helix prison facility by Reaper.[5] Following his escape, he traveled to Numbani where he fought against several OR15 defense units specifically designed to combat him.[6] He easily destroyed the OR15 units, and no civilian casualties were reported.[7] He thereafter reclaimed the gauntlet and left Numbani.[8]

Doomfist's gauntlet within the conspiracy web