Dorado is an Escort map in Overwatch.

It is Festival de la Luz in Dorado, an annual celebration of the end of the Omnic Crisis and the period of darkness – both figurative and literal – that engulfed Mexico when the omnics destroyed much of the country’s power grid and infrastructure. But there is a new dawn, as LumériCo and its CEO, war hero and former president Guillermo Portero, are unveiling a string of fusion plants that promise to deliver clean, free energy to the Mexican people.

The attacking team begins in Missión Dorado, a historic location famous for the sound of the ornamental bells that hang amidst its arches.[1] 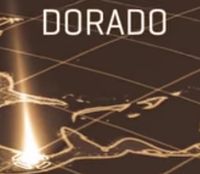 Dorado is a city in Mexico[2] set high above a sweeping bay. The city is powered by gigantic ziggurats, which can be seen glowing around the bay. These were constructed by LumériCo, and as the final one was constructed, CEO Guillermo Portero gave a speech to mark the occasion.[3] The city holds a festival that celebrates the end of the Omnic Crisis, though it possesses an underground criminal element.[4]

The city was identified as a hotspot by Overwatch in the decades following the Omnic Crisis.[2]

The objective of this map is to transport a truck through the city streets and into one of the ziggurats[5] in order to restore power to the region[6]. The attacking team starts very close to the payload truck at the lowest point on the map. The defending team spawns at several locations, two of which are located within the ziggurat powering Dorado.

The winding streets and courtyards of Dorado provide many opportunities for snipers on this map. A vantage point is set up directly opposite of the truck's starting location, making it an ideal position for a hero such as Widowmaker to set up. The narrow passages can make abilities like Dragonstrike effective. Torbjörn excels on Defense as his turret can cover a lot of the wide open areas.

The small ledge up and to the right of the large gate just after the first checkpoint can be a very useful and amazing spot for Torbjörn's turret, McCree's Deadeye, or Hanzo's Dragonstrike because of the long, straight road that the ledge overlooks. Torbjörn's turret has a good and clear shot at all of the enemies due to the road shape. McCree's Deadeye also has a very similar advantage as the turret in it being a good place for a clear lock-on to enemies. And Hanzo's Dragonstrike is also similar in the fact of the road being long and straight, being a clear path for the Dragon. Also combined with its height advantage, enemies wouldn't expect it coming from above them. The ledge also gives access to another (very) small edge used for foliage on the building next to it. You can get up there, just try not to fall off. Doing so can allow Hanzo to shoot directly down at the payload, killing enemies very quickly and unexpectedly due to the spot being just about 15-20 feet over the payload. The fact of the dragon coming from the sky and how quick it hits the payload can kill enemies before they have much time to move. It can be very useful if the team is very "cocky" and most of them are grouped on the payload (Most likely behind an Orisa shield.) 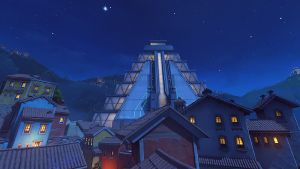 One of the Dorado power plants