Eichenwalde is a Hybrid map for Overwatch.

Eichenwalde is located in the middle of the Black Forest.[1]

The town was the site of one of the most famous battles during the Omnic Crisis. It was here that the leader of the Crusaders, Balderich von Adler, and a handful of his best soldiers, including his pupil, Reinhardt Wilhelm, made a last stand against an advancing automaton army.[2] Since Eichenwalde was in the way of a larger omnic advance to Stuttgart, the town was evacuated on October 11, from 3 to 8 o'clock.[3] Outnumbered and outgunned, almost all Crusaders were slain during the resulting combat, including the organization's leader. However, thanks to their valiant efforts, the German military was able to push back the omnic offensive and win the fight.[4][3] In the present day, Eichenwalde lies abandoned, and the forest has slowly begun overtaking the village. However, the scars of war will never completely fade.[5]

One team must escort a battering ram to Eichenwalde Castle to reclaim Balderich’s remains from their resting place, while the opposing team does everything in its power to stop the keep from being breached.[4]

This choke is notorious for being a challenge to attack. Being that there is only one main flank and a main entrance. The main entrance is common fortified with some sort of barrier followed by the rest of the offensive, defensive and support heroes.

The right flank and left cover are also commonly visible to the defending team. A coordinated push or an unseen flank is usually needed to break the defenses.

The right flank is the only flank in, from there a flanker like Tracer or Genji can make their way up the stairs to the point.

The left flank can be taken through the main entrance, from there a flanker can go into the server room and either go straight to the point or take a leftwards route that leads to the house.

There is also multiple popular flanking methods going over the bakery by utilizing a chimney to position oneself on top of the building and then eventually going over it.

The last flank can only be achieved with some very mobile characters. Starting on the stairs to the right of the attackers spawn one can use Pharah to fly across the hole in between attacker's spawn and the castle.

Attacking: When trying to take the point watch out for enemies on the ruined house on the right and the house on the left.

Defending: When defending look for anyone coming from over the top, in the house on the left, and coming through the doorway.

When fortified, the bridge ahead of the payload can be difficult to push through. A way around this is to cross the large gap to the right of the attackers spawn that leads behind the payload. Pharah and D.Va can easily cross the gap. Genji can also cross but is much more difficult, requiring precise timing. Lúcio is also capable but is not recommended as he is more useful to his team by staying with them.

A very useful spot for Symmetra's teleporter in the Castle (At the end of the map) is the balcony overlooking the final checkpoint. If a Symmetra can successfully sneak past the defenses, she can place a teleporter on the balcony far enough back so that the Defense team can't see it. Once walking through the teleporter, allies can simply walk about 5 feet forwards and right down to the payload.

Another cool thing to do is to take a comp with Genji, D.va and Pharah(with or without mercy); they can go over the house with a hole in the roof, so they can backstrike the eventual Reinhardt or Orisa and his team. Of course it's less efficient if opponents are defending on the top just behind the point. Whereas, D.va can use matrix so the team can attack this pack of enemies.

Reinhardt and Orisa are good while defending the bridge (chokepoint). Also watch out for Tracer and Sombra as they might sneak past your team and get on point, distracting your formation allowing others to push in. Always take back chokepoint if you killed all of the enemy team and they're busy respawning. Bastion is also good at defending with Reinhardt or Orisa. Moira is also good, for throwing damage orbs through the chokepoint at the bridge.

Defensive teams should fortify the bridge ahead of the payload in the first capturing section. This will be a key choke point as there aren't many ways for the attacking team to go around. 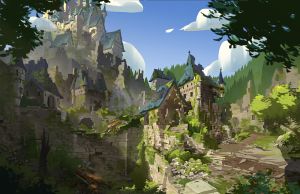