From Overwatch Wiki
(Redirected from Health)
Jump to: navigation, search 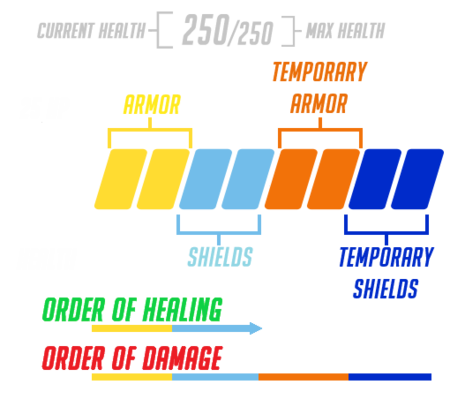 Some heroes have a type of HP called shields. Symmetra's Teleporter also has some shields. Barriers are made entirely of shields.[1][2]

On heroes and Symmetra's Teleporter, shields automatically regenerate at a rate of 30 shields per second after avoiding damage for 3 seconds. This is treated as a form of healing, meaning Biotic Grenade can amplify or block it. On Reinhardt's Barrier Field, Brigitte's Barrier Shield, and Sigma's Experimental Barrier, they regenerate at various rates after being inactive for 2 seconds.