Hollywood is a Hybrid map in Overwatch. 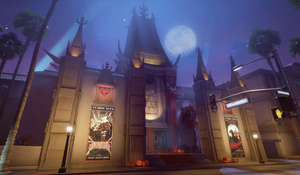 Welcome to the glitz and glamour of Hollywood, California, where palm trees and fancy cars line the streets, and movie stars, directors, and high-powered studio executives rub shoulders for a chat and a drink at Galand's. Down the street from the Mandarin Theatre, Goldshire Studios' omnic film auteur, HAL-Fred Glitchbot, has created his two latest films, They Come from Beyond the Moon and Six-Gun Killer, to varying amounts of critical and commercial acclaim. However, even Tinseltown has been gripped by anti-omnic sentiment, and the outspoken director has become a prime target in the escalating conflict.[1]

The 'payload' in the map is HAL-Fred Glitchbot, an omnic director. The map starts off in the Hollywood boulevard, then moves on to Goldshire Studios. Numerous studio sets are passed through.[2]

At the setup of the game, have any snipers or Junkrat take the side exit. From here these characters can go up the stairs and snipe/blow up enemies. Have your tanks and healers at the main entrance (a Reinhardt is recommended since there isn't much cover) though healers can choose to take the side door if wanted, since many characters go for the healer first. Attack and defense can go either way, but keep mostly everyone at the main entrance to draw the enemy team's attention off the healers or snipers on the side.

Usually you should have a strong backline on the first point. The best place to set up your snipers is usually the building to your right. Also, having tanks such as Roadhog, Reinhardt and D.Va is strongly recommended.