The Junkers are a cutthroat society that resides in the Australian Outback.

The origins of the Junkers lie with the destruction of the country's omnium, which turned the Outback into an irradiated wasteland that was uninhabitable to most humans. Those who survived formed the Junkers, who scavenged the husk of the omnium and formed a lawless, cutthroat society in its shadow.[1] The Junkers continue to pilfer the omnium. When they aren't doing that, the Junkers blow off steam in the Scrapyard—a massive gladiatorial arena whose combatants fight for glory, riches...and to survive.[2] 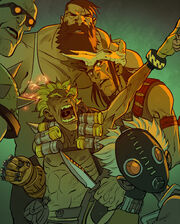 A group of Junkers

Hammond is the current champion of the Scrapyard. However, the Junkers do not know that Hammond is a hamster, and Hammond himself is not a Junker.[3]