Arcing projectile
After placing one of his homemade Concussion Mines, Junkrat can trigger it to damage enemies and send them flying... or propel himself through the air.
Health:
25
Damage:
30-120
Projectile speed:
25 meters per second
Area of effect:
3 meters radius
Ammo:
2 charges
Casting time:
0.1 seconds (detonation)
Duration:
Until detonated
Cooldown:
8 seconds per charge
Headshot:
✕
Throw a knockback mine with LSHIFT then detonate it with

Concussion Mine, deploying a second Steel Trap will remove the first.

Area of effect
Junkrat revs up a motorized tire bomb and sends it rolling across the battlefield, climbing over walls and obstacles. He can remotely detonate the RIP-Tire to deal serious damage to enemies caught in the blast, or just wait for it to explode on its own.
Health:
100
Damage:
50 - 600
Move. speed:
Junkrat: Immobilized
Tire: 12 meters per second
Area of effect:
10 meter radius
Casting time:
1 second
Duration:
Up to 10 seconds
Headshot:
✕
Ultimate cost:
1925 points
Drive and detonate an exploding tire.
Details:
Example Video

Junkrat is a hero that excels at defending an area through the use of traps and indirect fire; he is valued for his damage output and area denial capabilities. He has strong mobility thanks to

Concussion Mine and deals high (if inaccurate) damage with his

Frag Launcher. He also can push objectives as well, and he can still change the battle after death thanks to

Total Mayhem. The explosive and arcing projectile nature of his weapon, however, makes it challenging for him to fight at close range with most heroes.

Graviton Surge, run into the Surge only as a last resort. you might just get a few people.

deflected by Genji and or destroyed by D.Va's

RIP-Tire Junkrat's Ultimate ability. When activated, Junkrat temporarily gains control of a fast-moving, explosive tire. His view switches to the RIP-Tire, which can be steered with your normal movement controls, and can climb walls by holding the jump button while next to them (much like Genji or Hanzo's passives). Pressing either your primary or secondary fire will cause the tire to detonate, dealing heavy damage in a decent area, or exploding automatically once the tire's duration runs out. The RIP-Tire has a Health pool that, if depleted, will cause the tire to disappear with no explosion.

Frag Launcher, it takes a considerable amount of skill and practice to accurately land grenades. In general, it's best to launch your grenades at an area, rather than at a specific target, as Junkrat's biggest strength comes from his ability to make any area hazardous to travel through. If you're forced to fight an opponent head on, try to lead your Frag Launcher shots so that your enemy will run into them.

Concussion Mine well are key when playing Junkrat. Your Steel Trap should be placed in spots without much room to maneuver in order to force enemies to either destroy the trap or step on it. This can be used to protect your flank by telling you when an enemy is coming through the area where you dropped your trap. Place your Concussion Mine above a doorway or next to a wall that you know your opponents will be traveling by. The explosion can be used to both damage and separate the enemy team, allowing your team to pick off whoever gets blown towards you. 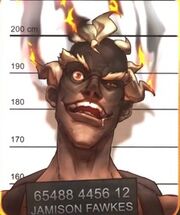 Developer Comment: These are a couple quality of life changes for Junkrat. This makes it possible to do some Concussion Mine jumps that were no longer possible after a previous increase to its projectile speed.