Katya Volskaya is the CEO of Volskaya Industries. She holds great political and social influence within Russia,[1] and is regarded as a hero by the Russian people.[2] 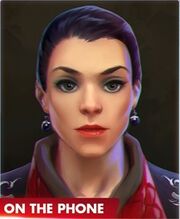 Katya in the Atlas News interview

Katya oversaw Volskaya Industries as part of Russia's war with the reactivated Siberian omnium. Unknown to her people, she received technology from other omnics.[1]

At some point, she gave an interview to Atlas News in light of the company's increased Svyatogor production.[3]

Katya conducted an inspection of her company's new mechs, where she was the target of an assassination attempt by Talon agents Reaper, Widowmaker, and Sombra, acting on the orders of Vialli. The infiltration was largely successful, but before Widowmaker could fire the killing shot, an alarm was triggered causing Katya to flee to safety. Widowmaker tried to salvage the shot anyway but narrowly missed, shattering the lower half of the CEO's right earring. Katya was then targeted by Reaper until a piloted mech engaged him.

Finally, she was targeted by Sombra, who used her invisibility to enter her fortified office and incapacitate her guards. Katya feared she would be killed, however, Sombra revealed that she triggered the alarm, and blackmailed Katya with images of her dealing with omnics for their technology. Sombra also noted how exposure would affect "the future of Russia" while handing Katya the photo of her daughter from her desk, hinting at how the fallout of a scandal would impact her. Sombra wanted Katya to be her "friend" who she could call on for the occasional favor. As her security was nearly through with getting the door open, Katya conceded and Sombra made her escape, reporting the mission as a failure.[1] 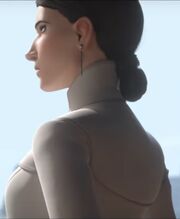 Some time later, Katya called a meeting with Sergeant Aleksandra "Zarya" Zaryanova of the Russian Defense Forces, as part of a plan to take action against Sombra. While initially confident,[1] upon learning of the nature of the assignment, Zarya became uneasy, believing that this mission was better suited for a spy rather than a soldier. Katya dismissed her concerns, and sent Zarya on her way. Weeks later, Zarya reported that she'd exhausted all her leads. Katya ordered Zarya to head for Numbani, where she'd find a hacker that could help her. The hacker was Lynx Seventeen, an omnic. A perturbed Zarya contacted Katya, asking if she'd known the hacker's identity. Katya explained that working with undesirable allies was sometimes necessary to achieve victory.

Zarya caught up with Sombra in Dorado. While she was able to incapacitate her, Sombra revealed Katya's dealings with the omnics to her. Ultimately, Zarya let Sombra go, and after parting ways with Lynx, contacted Katya about her secret dealings. Katya admitted to it, stating that she did what she had to do, and that while Russia would one day understand that what she'd done was necessary, that day wasn't here yet. Zarya agreed to keep Katya's secret.[4]