Lúcio is a Support hero in Overwatch.

On the battlefield, Lúcio’s cutting-edge Sonic Amplifier buffets enemies with projectiles and knocks foes back with blasts of sound. His songs can both heal his team or boost their movement speed, and he can switch between tracks on the fly.

Area of effect
Lúcio can knock his enemies back with a blast of sound.
Damage:
25
Max. range:
8 meters
Cooldown:
4 seconds
Headshot:
✕
Create a short-range blast wave to knock enemies away from you.
Details:
Example Video

Amp It Up
E

Area of effect
Lúcio increases the volume on his speakers, boosting the effects of his songs.
Healing:
Allies: 52 per second
Self: 40 per second
Move. speed:
+60% buff
Area of effect:
12 meter radius
Duration:
3 seconds
Cooldown:
12 seconds
Increase the effectiveness of your current song.
Example Video

Lúcio is a versatile Support who requires good situational awareness to master. His aura allow him to contribute damage in fights while passively buffing his allies, and he can protect against enemy ultimates and enable his team to make aggressive pushes using his Sound Barrier. He can escape dangerous situations using his Amped Up speed aura and his Soundwave's knockback effect, giving him a relatively high survivability for a support hero. While his damage output is lower than many other Supports and he doesn't have high single-target healing like Ana or Mercy, his multiple-target healing and speed buffs make him a valuable member of any team.

Come on, Let's bring it together!

Lúcio is an international celebrity who inspires social change through his music and actions.[2] He has a positive, up-beat attitude,[3] and is always looking towards the future.[4] 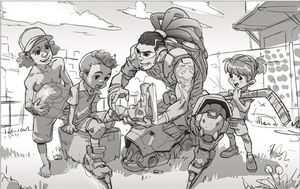 Lúcio Correia dos Santos grew up in Rio de Janeiro, in a poor and crowded favela that was hit hard by the financial upheaval following the Omnic Crisis.[2] During his youth, Lúcio's first love was hockey, but he also found time to play football with the other kids in Rio.[6] As Brazil began the long process of recovery, Lúcio wanted to find a way to lift the spirits of those around him. He found his answer in music and its power to bring people together and even help them forget their troubles, if only for a short time. He performed on street corners, in block parties, and as he got older, at a string of legendary underground shows.

But Lúcio's close-knit community was thrown into chaos when the multinational Vishkar Corporation secured a contract to redevelop large tracts of the city. Lúcio and his neighbors had been told that the development would improve their lives. However, that promise never became a reality. Vishkar imposed controls on the residents in the name of building a more orderly society: enforcing curfews, cracking down on what the company perceived as lawless behavior, and exploiting the populace as a cheap labor force.

Lúcio wouldn't stand for it. He stole Vishkar sonic technology that had been used to suppress the people[2] (initially invented by Lucio's father, although it was owned and patented by Vishkar),[7] and he converted it into a tool to rally them to action. In a popular uprising, they drove Vishkar out of their neighborhoods. Lúcio's leadership made him a star overnight and a symbol for positive social change. His music skyrocketed in popularity. Whereas he had once performed locally, he was now filling arenas across the world.[2] He built up a career doing live shows, and became something of a national icon in Brazil.[8]

With his newfound fame, Lúcio realized that he had an opportunity to make a difference and change the world for the better.[2] 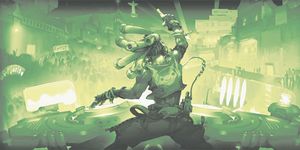 Lúcio at a concert

Lúcio embarked on a world tour to promote his debut album, Synaesthesia Auditiva, which he spent two years working on. He released two tracks beforehand, and was delighted with the positive reception.[8]

Lúcio was set to give a live concert in Numbani.[9]

Adverts in King's Row during the winter holiday season indicated that Lúcio was to give a New Year's Eve concert.[10] 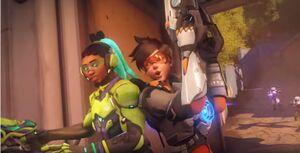 Lúcio was present at Rio when the city came under attack by Null Sector. He sent out a transmission saying that he'd hold them off for as long as he could. He fought alongside members of the newly reformed Overwatch in getting to Null Sector's command ship. Afterwards, he apparently joined the group.[11] 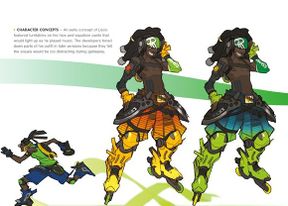 Developer Comments
Lúcio has often felt like a must-pick due to his raw healing output and the versatility of providing a speed bonus to your entire team. The goal of these changes is to keep those elements feeling strong, but making them harder to apply to everyone on your team at all times. The end result is that he should feel stronger with teams that he can stay close to but not as strong when on teams with heroes that are often spread out (such as Pharah, Widow, Genji, etc). Much of Lúcio’s character power was tied up in his large passive auras, which caused other elements of his kit to be weakened over time in an attempt to balance him. Now that his auras are more focused it will allow them to be much stronger and allow Lúcio to be more active in his role.

Developer Comment
Lúcio’s overall healing output has always been on par with (or even higher) than Overwatch’s other healers, and his other benefits made him an almost mandatory pick.

Developer Comments
Altering the size of projectiles in flight had too many unintended side effects to keep in the game, at least in its current form. We will continue watching this and make additional changes if necessary. We’re also making quick melee more consistent when interacting with enemy abilities.

Developer Comments
Thanks to Lúcio's speed increase, he was almost a must pick in every lineup.