From Overwatch Wiki
(Redirected from Liao)
Jump to: navigation, search

Dr. Mina Liao[1] was the creator of Echo and one of the six founding members of Overwatch.[2]

Liao held belief in the potential artificial life and its power to transform the lives of humanity for the better.[3] She believed that artificial life was still fundamentally life, and that there was more people could gain from treating AI as something more than servants.[1] 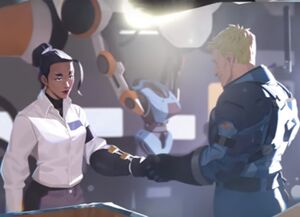 Liao is recruited into Overwatch

Dr. Liao was widely considered one of the preeminent experts in the fields of robotics and artificial intelligence, and was employed by the Omnica Corporation. There she worked on the team that was responsible for the design and creation of the omnics that would ultimately wage war against humanity during the Omnic Crisis. Ultimately, it was this expertise that led her to be recruited into Overwatch to help stop her creations.[3] She was caught aback by the offer, pointing out that she was the one who created the omnics. However, as Jack Morrison pointed out, who better then, to help Overwatch fight them?[4] He was looking for a robotics expert, who could educate Overwatch on the nature of the threat they faced. Liao accepted his offer, intent on helping her new comrades understand what omnics were, how they worked, and how to put an end to the Crisis.[5]

The Omnic Crisis ended with a human victory. However, despite the catastrophe, it was not enough dissuade Liao of her firmly held belief in the potential artificial life and its power to transform the lives of humanity for the better. She dreamed of improving upon the original omnic designs.[3] She threw herself back into robotics research, wondering how she could evolve omnics to the next level.[5] While with Overwatch, she created Athena, Liao was involved in developing the prototype of Athena. Liao noted that after the Crisis, relations between humans and omnics were deteriorating, even as omnics were becoming more human.[1]

Liao's theories would become the foundation of the Echo Project.[3] She pitched the idea of an adaptive robot to Commanders Morrison and Gabriel Reyes. Something that could accompany strike teams and fulfill any role required of it, from piloting a ship to providing medical care.[5] Morrison, though reluctant to move forward with the idea, approved it in light of the success of Athena,[1] but had Liao give him her word that it wouldn't get out of hand.[5] 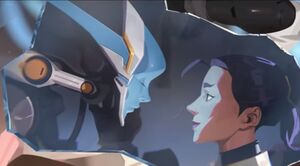 Due to Overwatch’s restrictions on artificial intelligence research and development after the Omnic Crisis, Liao was forced to limit Echo’s capabilities. What she created was a multirole, adaptive robot that could be programmed to learn different functions: anything from medical support to construction: but had serious limits to its independent decision making. Critically, Echo had multiple layers of protections, failsafes, and security to keep it under control. Echo was used successfully on test missions alongside Overwatch strike teams, but Overwatch leadership was reluctant to put it into full service. However, the truth was that Liao had programmed Echo with a powerful, general artificial intelligence that learned by observation. From the heroes she was around all the time, she would learn how to do what they did, and how they did it. After thousands of hours in the scientist’s presence, much of Liao’s behaviors (including her speech), were adopted by the Echo robot. This secret that was known by very few, including Blackwatch agent Jesse McCree, who had, at times, been assigned to guard the scientist.[3] A friendship developed between the two of them, and he was often party to her work on Echo.[5]

Liao is killed in the blast

Liao was killed in an attack on her Overwatch lab,[3][5] caught in an explosion. As her life flashed before her eyes, she wondered if she'd made the world a better place. She recalled being recruited by Omnica, by Overwatch, and her creation of Echo. She reflected that all she wanted was to help the world.[4] 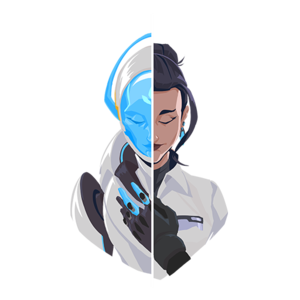 With Liao's death, the Echo Project was discontinued, and Echo herself placed into quarantine.[3] However, Echo was reactivated, and joined a reformed Overwatch, aiding them against Null Sector.[6] Echo considered herself to be Liao's legacy. Her 'echo.'[4] As Echo continued to adapt, those around her wondered if she'd remain an echo of Liao, or become her own person.[5]

In posterity, Liao was better known for her work with Overwatch than Omnica.[3] At some point, fragments of her personal log were recovered.[1]