Lizzy is an omnic that lives in the Underworld, an omnic city beneath King's Row.

Lizzy is a fan of 20th century British music.[1]

Lizzy, Iggy, and Lady in the lab

Lizzy was active not long after the Omnic Crisis. She got traded to the testing division of a chemistry lab, where she met Iggy, and later, Lady—two fellow omnics that she worked alongside. One of their human colleagues introduced Iggy to music, who in turn introduced it to Lizzy and Lady. Lizzy found herself invigorated by it.[2] The three came to share a room in the Underworld, where they would spend their time listening to various British rock bands.[1]

One day, Iggy brought a human with her to their abode—former Overwatch agent Lena "Tracer" Oxton. She was gobsmacked at their music collection. Lizzy remarked that it was nice to meet someone who appreciated it, that not all omnics felt the same. The four spent time listening to music.[1]

By this point in time, the Underworld's grid was at risk of giving out. Lizzy watched as Iggy and Kace bickered over Tracer's promise to help provide them.

Later, Lizzy, Iggy, and Lady attended Mondatta's speech in King's Row, where they again met Tracer. The four listened to Mondatta's speech, but Tracer walked off. Iggy ended up following her as well. The speech ended with Mondatta being assassinated by a sniper's bullet. Despondent, Iggy returned to Lizzy and Lady, stating that Tracer had blinked out of the way of the bullet that had ended up killing Mondatta. Lizzy asked why she'd do that, to which Iggy responded that she didn't know.[3] The three returned to their abode.

Iggy held Tracer responsible for Mondatta's death, even though Lizzy and Lady weren't so quick to pass judgement. Within the Underworld, Kace began rallying the omnics, declaring that they should strike back. The three watched his speech, Iggy warming to Kace's calls for violence, while Lady was more inclined to follow Mondatta's peaceful vision, and still didn't bear a grudge against Tracer. Iggy stormed off as their argument reached fever point, while Lizzy remained silent. 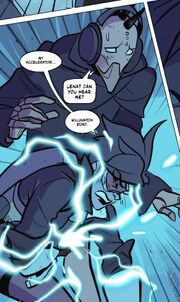 The omnics rioted on the surface, which necessitated the calling in of Special Ops and the deployment of a sonic pulse, which resulted in Lady's death. Lizzy and Tracer attended her memorial surface in the Underworld. Afterwards, Kace told Tracer to leave the Underworld, telling her that she was no longer welcome. Lizzy donned a cloak and followed her to the surface, and came across Tracer as her chronal accelerator malfunctioned.[4] She got her back to her home, where, after being given some parts by Emily, Lizzy was able to fix the device. With Tracer safe, Lizzy explained that she knew that she wasn't the reason Mondatta was dead. As she pointed out, Tracer wasn't the one who'd shot the bullet which ended Mondatta's life.

Turning her attention to the spare parts Emily had provided, Lizzy found a device that she believed could fix the grid. However, she doubted she'd be able to get back into the Underworld, as Kace's thugs had followed Tracer earlier, and in doing so, Kace would know that Lizzy had followed her as well. The conversation was interrupted, as Tracer took a call from Winston, and Lizzy was contacted by Iggy. Iggy told her that something was going on with Kace, but the line cut off. Tracer and Lizzy ran to the Underworld, the former slowing down for the latter.

Arriving at the Underworld's entrance, they found Kace's guards standing watch. Tracer was able to distract them so that Lizzy could gain entrance, after which Tracer reunited with her inside. They made their way down to the Underworld's fourth level, where Iggy would be. However, even upon arriving, Lizzy still couldn't find Iggy's signal. However, they didn't have to search for long, as Kace announced his presence, revealing that he'd taken Iggy captive. He declared that the omnic revolution was nigh.[2]