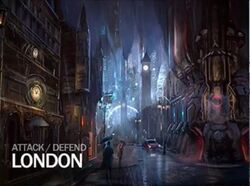 London is the capital of the United Kingdom. Its King's Row neighborhood has some of the highest human-omnic tensions in the world.

Omnics in the United Kingdom are treated as second-class citizens, forced to undergo mandatory registration, and denied basic rights and citizenship. As a result, the extremist Null Sector organization enjoyed popular support and took more and more control of London.[1]

Seven years before the present day, the King's Row Uprising saw London in flames. By the 27th day of the Uprising, Null Sector had taken Mayor Nandah, Mondatta, and a hundred other captives and held them hostage in an armed power plant. Thousands were in need of medical aid. The prime minister of the UK forbade Overwatch from interfering. Despite this, Jack Morrison authorized an illegal Overwatch operation to end the situation.[1]

Sometime after, Shambali leader and non-violent omnic preacher Tekharta Mondatta was assassinated by a Talon agent while giving a speech in King's Row.[2]

In the present day, the city remains a hotbed of human-omnic conflict.

London was pitched as an attack/defend map during development for Overwatch. The concept later transitioned to King's Row.[3]