From Overwatch Wiki
(Redirected from MEKA)
Jump to: navigation, search

The Mobile Exo-Force of the Korean Army (MEKA) is a unit that exists within the South Korean Army.

MEKA exists primarily as a mechanized walker force. It also has access to infantry, medical, and search-and-rescue support[1] (either within the unit or through the South Korean Army).

MEKA began its life as an armored drone unit, formed by the South Korean government in order to combat an Omnic Colossus that had ravaged the country after emerging from the East China Sea. Every few years the omnic would return, assaulting South Korea and its neighbors. The omnic learned from these encounters, often reconfiguring itself in a different form and appearing with new weapons and capabilities. Each incident ended in a stalemate, with the monstrosity defeated but not destroyed.[2] After the omnic's first attack, MEKA transferred some of its hovercycles to the KNPA.[3]

As the omnic continued to adapt, it eventually disrupted MEKA's drone-control networks, forcing the military to place pilots in the mechs. Scrambling to find suitable candidates, the government turned to the country's professional gamers, who possessed the necessary reflexes and instincts to operate the mechs' advanced weapons systems. In addition to standouts from other fields that required similar talents,[4] a number of top stars were drafted, who now pilot MEKA's walkers in defense of their homeland. In a concession to the predilections of their new draftees, the government suspended certain military protocols and allowed them to customize their uniforms and mechs, as well as broadcast combat operations live.[2]

MEKA entered a state of combat with the Gwishin,[1] a group of omnics emerging from an omnium in the East China Sea.[5] The omnics and MEKA reguarly engaged, the Gwishin attacks occurring every few months. South Korean news media painted a far more rosy picture than what was actually occurring, as the MEKA forces took losses, while the Gwishin continued to adapt and get stronger. One example was this was where they attacked Busan a week after their last attack, rather than the predicted months. MEKA pilot Hana Song was able to defeat them alone (as the rest of her squad wasn't available, in part due to damage sustained in the last battle), albiet at the cost of her own mech and broken bones (facts that the media omitted from their report).[1] 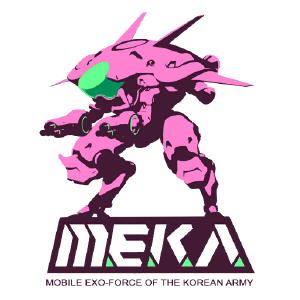