Mauga is a Talon Heavy Assault and former friend of Baptiste.

Tall and muscular, Mauga often portrays himself as being a "big dumb brute." However, this is a facade, as he possesses great cunning. He talks fast and loose, and has a tendency to treat strangers as if they are friends. He is proficient in close combat; Baptiste regarded him as being "like a demon." A sociopath and a sadist, Mauga flips between his lighter and darker sides quickly, though can lose himself in the latter. Only Baptiste has ever been able to talk him down from this state in the field. Baptiste himself serves as a blindspot for Mauga, who's shown him mercy where he might otherwise not do so.[1]

While in Talon, Mauga met Baptiste. The two hit it off immediately and performed numerous extractions together. They carried out operations in locations such as Singapore and Makati, both of which resulted in civilian casualties.[1] 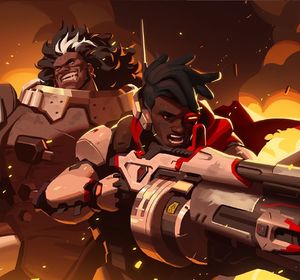 Mauga and Baptiste in Monte Cristo

Four years before Winston sent out the Overwatch recall, Mauga and Baptiste were part of a Talon operation at Monte Cristo. Under the command of Captain Cuerva, Talon was assigned to take out Daniel Fernández; leader of the Playa Cartel which had been encroaching on Talon's territory. However, upon reaching Fernández's safe room, they found that he wasn't there. Enraged, Cuerva ordered the Talon unit to tear the town apart until they found him, which resulted in mass collateral damage and civilian casualties. Disgusted at what had transpired, Baptiste tried to flee in a fishing boat, but was confronted by Mauga. He told Baptiste that there were no good people, and that all they could do was have fun while they had the chance. Not finding the fun in mass murder, Baptiste declared that he wasn't going back, and that if Mauga didn't let him go, he'd have to kill him. Over the radio, Cuerva asked Mauga if he'd found Baptiste. After a long pause, Mauga told him that he hadn't found his comrade. When asked why he'd done it, Mauga stated that he'd always liked Baptiste, but that now he owed him a favor, and that he should call him when he was "ready to come home." With that, the two parted ways.[1]

What We Left Behind[edit | edit source]

A less than pleasant reunion

Four years after the Monte Cristi debacle, Mauga went with Trung Le Nguyen to Haiti—Vernand Sainclair of Sainclair Pharmaceuticals hadn't been paying Talon, so they were assigned to make the man come to his senses. Aware that Baptiste was in Haiti, Mauga insisted that they use Baptiste. Nguyen was skeptical, wanting someone more reliable, but Mauga insisted, and Nguyen relented. To this end, they confronted Baptiste at Lefort's. Mauga's threats were clear, despite his outwardly casual demenor, and Baptiste agreed to help them on the job, though asked what happened afterwards. After all, "no-one left Talon except in a coffin." With a smile, Mauga told his friend not to worry about it.

The following morning, Baptiste met with Mauga and Nguyen outside Sainclair's mansion. Nguyen had scheduled an appointment with Sainclair, so all the trio had to do was just walk in. The plan went well enough at first, but inside the mansion's library, they didn't find Sinclair, but did find Sinclair's personal security training their guns on them. Mauga activated his shield, and Nguyen killed most of guards with his sidearm. One guard remained, choked by Mauga, but Baptiste talked his former friend down long enough to interrogate the man to find out where Sinclair was. The guard stated that Sainclair was in his office. Mauga thanked the guard by breaking his neck.

The trio fought their way through the mansion, cutting through its security forces before finding Sainclair, holed up in his office with a revolver. He fired at Mauga, but the bullets bounced off his shield. Mauga covered Nguyen as he confronted Sainclair, asking why they shouldn't just kill him. Sainclair protested that he had information, and revealed that it was an Overwatch recall order. Various dossiers were part of the data. He revealed that he'd received the transmission three days ago, and the reason that he'd received it at all was that he was a former member of Overwatch himself. However, the data was worthless—Talon already had access to the information, as they already had former Overwatch agents on their payroll. Therefore, Sainclair was still going to die, and Mauga suggested that Baptiste do the honors. Baptiste walked forward, but instead of shooting Sainclair, dropped a flash bang, incapacitating Mauga and Nguyen, giving him time to flee with Sainclair.

Mauga tracked Baptiste to a wharf. That this was a repeat of their parting at Monte Cristi wasn't lost on Mauga, and he told Baptiste that he couldn't let him go a second time. The two engaged in a firefight—Mauga wanted to bring Baptiste into Talon alive, but was willing to injure him to do so. Baptiste used a prototype device to end the battle, throwing it into the air and shooting it. The resulting explosion destroyed a large portion of the docks, and possibly Mauga as well, as when the smoke cleared, he was nowhere to be seen. However, Baptiste suspected that he had survived the explosion.[1]