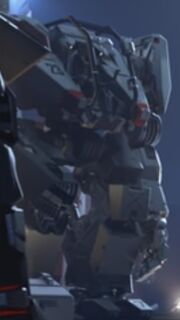 Mechs are a type of bi-pedal walker.

Mechs have been in operation since before contact with Watchpoint: Antarctica was lost. Mech technology has improved in the time since then.[1]

The Junkers carry out mech battles in the Scrapyard, which are one of the most popular forms of entertainment in Junkertown.[2][3] 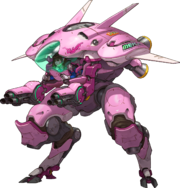 MEKA mechs (or at least the one used by Hana Song) are equipped with twin short-range rotating fusion cannons. They lay down continuous, high-damage fire without needing to reload, but slow the mech's movement while they’re active. The mech is also equipped with jump boosters, a defense matrix that shoots down incoming projectiles, and a self-destruct system. When activated, the mech sets its reactor to overload, and the pilot is ejected.

Originally, these mechs were drones, but as MEKA's networks were hijacked by the omnic that they faced, they turned to human pilots. These pilots are allowed to customize their mechs and broadcast their combat operations to a live audience.[4] Pilots must earn their operator's licence before piloting their mech.[1]

Omnics have utilized devices similar to mechs, if not necessarily mechs themselves. During the first Omnic Crisis, they hijacked the Titan walker, turning it into a weapon of war.[5] Likewise, the omnic that has ravaged South Korea (necessitating MEKA's formation in the first place)[4] is quadrapedal.[6]

Volskaya Industries produces Svyatogor mechs, which are assigned to guard Russia's cities,[7] as well as the Triglav protector.[8] During the Second Omnic Crisis, a smaller mech was produced. At the time of their creation, these were the first new mechs the company had produced in a decade. Controlled by a single pilot, these mechs are equipped with new guidance systems. The mech's right arm is equipped with a particle beam, while the left arm is equipped with a type of shield generator.[9]