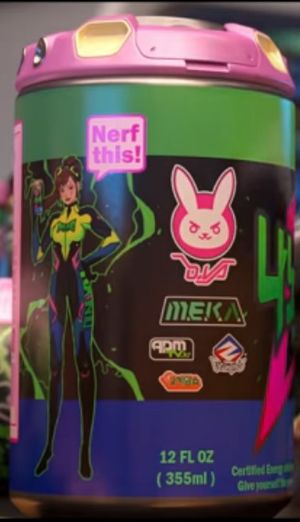 A can of Nano Cola

Nano Cola is a beverage brand that is promoted by D.Va. It comes in bottles and cans. In the case of the latter, through the use of a simple electronic device on top, it makes a "Nano Cola, enjoy!" exclamation using a recording of D.Va's voice, along with flashing lights and a simple digital tune, every time a can is opened.

The brand was a sponsor of D.Va during her pro-gamer career and continued as one after she joined MEKA. Hana doesn't promote the brand simply for fame or money though: she's also an enthusiastic consumer of the drink herself.[1]