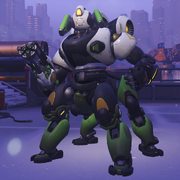 The OR15 (alternatively stylized as OR-15)[1] was a recently developed type of defense robot.[2] After the Numbani airport attack, the OR15 program was decommissioned.[3]

OR15 units in Numbani

The OR15 defense robot was an omnic[4] based off the Omnic Crisis OR14. It was designed to protect the citizens of Numbani from potential external threats and more importantly, Doomfist; twenty years after the Omnic Crisis.[3] Built like centaurs, OR15s had four legs, with a matte-gray titanium frame covering their polished white chest plating. Their eyes glowed yellow, and hydraulic fluid ran through their bodies. The OR15s were highly lethal, but lacked social skills. Efi Oladele noted that they were more focused on capturing criminals than integrating with the wider community, never using honorifics or bowing, though were still capable of basic speech. She also noted that their aesthetic was at odds with the rest of the city's.[5]

While the units were suited for battle and initially performed their function, they soon lost horrifically in a fight against Doomfist in the Numbani airport.[6][7] As a result of the fight, Doomfist's gauntlet was stolen.[8] Subsequently, the citizenry of Numbani gave up hope on the OR15.[7] After the attack, the program was scrapped, the units decommissioned, and the civil government sold off the remaining OR15s.[3] Functional individual units were sold off to independent bidders, while those too damaged to be sold were intended to be used as scrap metal.[5]

Efi Oladele purchased one of the decommissioned OR15 units intended for the scrap heap[5] and created Orisa, an upgraded version of the OR15 designed as a singular unit to represent what the OR15 units were supposed to do for her city.[7]