Oasis is a Control map in Overwatch.

Oasis is one of the world's most advanced cities, a shining jewel rising from the Arabian Desert. A monument to human ingenuity and invention, researchers and academics from around the region came together to found a city dedicated to scientific progress without restraints. The city and its inhabitants are governed by the Ministries, a collection of brilliant minds who possess many secrets that have attracted the interest of powerful organizations from around the world.[1]

Oasis is set in the Arabian desert of Iraq. It was founded by a collective of eight leading scientists, led by Ibrahim Hassoun, Anya Al-Shahrani, Youssef al-Jabiri, and Mehmet Farhat.[2] They were looking for a way to push the boundaries of what modern science at the time could do, albeit hindered by regulations,[3] feeling that science in the modern world was progressing at too slow a pace.[4] To that end they founded Oasis as a testament to the ingenuity of humanity. In their minds, what better way to do so than by turning a desolate landscape into one of the most technologically advanced and wondrous cities in the world, which could serve as a hub for unrestricted scientific endeavor.[3] (The Ministry of Geology, led by Dr. Al-Shahrani, spearheaded the effort by developing cutting-edge technology that could sustain a thriving city in a desert environment.)[2]

As per its goal for advancing human knowledge, Oasis has one of the most highly educated populations on Earth, served by a state-of-the-art university and a database of all the world's known existing printed material. It also ranks as one of the safest cities due to its usage of advanced predictive surveillance and crime modeling. Inhabitants also enjoy access to a wide range of world-class amenities, such as the verdant Abu Hassoun Gardens, temperature controlled streets, the luxurious Gilded Tower Hotel, and the elBuffi restaurant, considered the best dining establishment in the world. Perhaps the only cause for concern is the growing city's heavy traffic, for which the Ministry of Transportation has issued a public advisory. One of Oasis' most recognizable landmarks is an enigmatic tower that remains under construction for an indefinite period of time. Already the world's tallest building, it is slated to become the tallest freestanding structure of any kind. It is believed that the project is part of the city's ever-expanding computational and data collecting efforts.[2]

The Vishkar Corporation desires to have a presence in the city.[5]

Each turn is played on one of the three sections of the map: 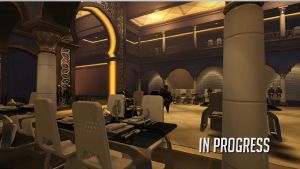 In progress shot of the map shown at BlizzCon 2016

Work on Oasis began after Overwatch shipped. The developers wanted to create another Control map.[6] Bill Petras wanted to do a futuristic setting for the map, and in discussion, the idea of basing the map on a Middle-Eastern setting came up; futuristic, but still bearing the architectural touchstones of the region.[6] The design of Oasis was inspired by several research photos of cities in Iraq.[7] The map itself is intended as a deviation of how Iraq has usually been portrayed in games (war-torn). The idea was that as Overwatch is set 60 years into the future, so perhaps a better future for the country could be represented.[8]