Olympia Shaw is a journalist for Atlas News, and an "expert" on the former Overwatch taskforce.[2]

Shaw grew up in the so-called "Overwatch Generation"—looking up to the heroes of the Overwatch group. In her words, the group taught her that heroes were real, and that she could grow up to be one. She felt gutted when news of Jack Morrison's death came, in light of the group's dismantlement.

Two decades later,[3] in light of a series of attacks that included Overwatch's old watchpoint in Colorado, she gave her analysis on the matter, as depicted by Atlas News.[2] When the assailant was revealed as an individual known only as "Soldier: 76," she promised an expose on the matter the following week.[4] She reported on the history of Jack Morrison, and the rumors that Soldier: 76 and Morrison were one and the same. She wrote that she now believed these claims to be true. She speculated on Morrison's motives, and admitted that while her view of Overwatch was idealized, the Morrison of her youth would have never engaged in such reckless activities, and concluded that he was not driven by noble intentions. She visited Indiana, where she saw monuments of Morrison, and his grave marker in Arlington National Cemetery. She claimed that the true Morrison had died all those years ago, and all the world had now was a shadow of the man he had once been.[3]

The day after in the Overwatch Museum, where former Overwatch agents Tracer and Winston fought off Widowmaker and Reaper, Shaw was present in New York, as the United Nations assured reporters that the actions of those agents were unsanctioned. She subsequently wrote an article on the history of the Omnic Crisis, Overwatch's rise and fall, and the mixed state of affairs the world had seen after its disbandment. She admitted that she was skeptical as to what Overwatch's return could mean. But looking at new heroes, such as Lúcio and D.Va, whose actions mimicked those of the Overwatch agents of old, she concluded that this new generation should be given the benefit of the doubt, even if the old had "let them down."[5] 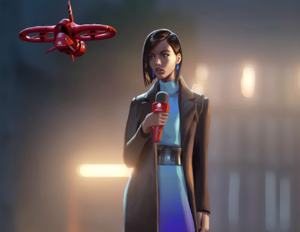