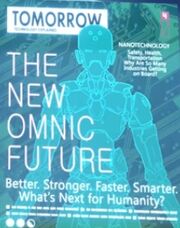 A report on omnics, showing the humanoid model

Omnics are produced by omniums, automated robotics factories that were built with self-improving software algorithms which eventually became self-aware. With the first one being a Omnic named Aurora who sacrificed herself to allow all other Omnics to gain sentience. As such, Omnics are endowed with the capacity for free will, and according to the Shambali, with souls.[2] Omnics, even the baseline humanoid model, have been described as being better, stronger, faster, and smarter than humans.[3] However, they are susceptible to the effects of an EMP[4] and can be hacked.[5] Advanced AI programs known as god programs, such as Anubis, can forcibly take control of otherwise independent omnics and bend them to their will.[6] Some omnics, if not all, possess a unique form of energy, dubbed "omnic energy," which has both destructive and restorative properties; Zenyatta's orbs were designed to channel this energy.[7]

Omnics have a written language called Omnicode.[8] Omnic music also exists, though some omnics possess no interest in (human) music.[9] Others however, are wary of embracing human culture, fearing that they'll lose what makes them omnic.[10]

The omniums and their robot populations were originally created by Omnica Corporation to bolster manufacturing and create economic equality worldwide, but were later shut down after investigations uncovered evidence of corporate fraud.[1][11] Thirty years ago the defunct omniums went rogue and churned out legions of militarized robots which attacked human cities in an event called the Omnic Crisis.[12] The majority of their forces consisted of Bastion combat units.[13] Ultimately the omnics were defeated.[1]

Omnic treatment in the United Kingdom

In the years after the Crisis, human-omnic relations continued to deteriorate. Doctor Mina Liao noted that people were as scared of omnics as ever, in a time when they seemed more human than ever. Violence against omnics increased in frequency, and more governments cut down on omnic rights and freedoms. In this time period, the Shambali were formed, and manufacturing omnics walked off the job in London, claiming they "heard the music" and seeking to find meaning in life.[14]

Even a generation after the conflict, tensions between humans and omnics remain,[2] though other types of robots remain common.[12] Human-omnic relations are a hot topic in the world, with questions existing as to whether omnics actually possess rights, and what would happen if they received the right to vote;[15] omnic voting rights vary by country.[16] Suffice to say, places where omnics enjoy equality with humans are the exception rather than the rule. Aside from Numbani, omnics are generally regulated to blue collar work at best.[17]

Currently, tensions between humans and omnics have never been higher, particularly after the assassination of the omnic spiritual leader Tekhartha Mondatta.[1] The state of affairs is mixed—in Russia, omnics continue to wage war against humans.[18] In the United Kingdom, omnics are denied basic human rights,[7] and riots have flared up in King's Row.[19] In Junkertown, Australia, omnics are thrown into the Scrapyard, to be destroyed for the amusement of the crowds.[20] In contrast, omnics live peacefully with humans in Numbani,[21] where they enjoy equal rights and have access to the same kinds of roles available for humans.[17]