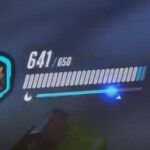 The On-fire Meter is a gameplay element of Overwatch. It appears as a bar underneath a hero's health meter.

The on-fire meter is an indication to the player as to how well they are performing with a hero. When "on fire," the hero's character portrait gets a flaming halo. The meter can get more 'fiery' through actions such as scoring kills, healing allies, completing objectives, and denying objectives to the other team. The enemy team will also know if a hero is "on fire" as a mechanism to alert other players of enemy player skill, allowing them to adjust their tactics.

On-fire status is also shown on the team summary screen shown during matches.

Time spent on fire is a measured stat, and can get you an end-game card for MVP.