Difference between revisions of "Pachimari"

Pachimari is a fictional character. It is a creature that resembles a turnip with a smiling face and green tentacles. Pachimari appear in multiple forms of media including signs, plush dolls, UFO catchers, films, and on clothing. 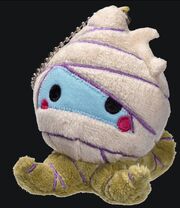