Pharah is a Damage hero in Overwatch.

Soaring through the air in her combat armor, and armed with a launcher that lays down high-explosive rockets, Pharah is a force to be reckoned with.

Pharah is a hero with excellent aerial mobility, but is somewhat crippled by staying on the ground. Her Rocket Launcher can dish out excellent damage, as it does not suffer from damage falloff and deals splash damage upon impact. Jump Jet launches Pharah high in the air, allowing her to properly position herself for well-angled attacks, or to escape from danger. The Hover Jets, her passive, allow Pharah to sustain her altitude and gain a small amount of height. This can be used to keep her away from threats on the ground, but will leave her vulnerable to enemies with "hitscan" attacks, such as Soldier: 76, McCree, and Widowmaker. Concussive Blast deals no damage, instead providing strong knockback both to enemies and Pharah herself. Barrage is one of the most dangerous ultimate abilities in the game, able to wipe out entire teams with ease, provided good setup and communication with your healers. Overall, Pharah is a good backline character, able to harass enemies from afar, deal good damage to shields, and separate the enemy team from each other. Pharah can also use her ability to fly to get to unusual points on certain maps, where enemies won't expect her.

"I Will Protect The Innocent."

With a strong sense of justice,[1] Fareeha Amari's commitment to duty runs in her blood. She comes from a long line of highly decorated soldiers and burns with the desire to serve with honor.[2] A serious[1] but altruistic individual, Pharah seeks to make the world a better place, and bring order out of chaos.[3] She loves the feeling of entering the unknown, and has a udjat tatoo on her right eye, bearing the Eye of Horus.[4] Every action she undertakes comes from "a deep place" within her spirit.[1] Fareeha has a mixed relationship with her mother,[5] and while her relationship with her father was initially complicated as well,[6] it is currently more familial.[7]

Fareeha and her mother

Fareeha was born to Ana Amari and Sam. She spent part of her childhood in Canada. While her relationship with her father was complicated then, she came to enjoy Canadian butter tarts with him over the holidays.[6]

Initially, Fareeha had a good relationship with her mother, who taught her martial arts. As a child, she grew up in the company of Overwatch;[8] she dreamed of following in her mother's footsteps and joining the organization.[2] She spent her life training, doing everything she could to ensure that one day, she could join Overwatch herself.[1] However, her mother was against it.[8] This led to a strained relationship between mother and daughter.[5] At some point, Fareeha asked for a toy rifle, but Ana refused, telling her daughter that she'd shoot her eye out. Her mother later came to regret her comments.[9]

After her mother was apparently killed in action, she got her udjat, to honor her memory. Her mother had borne a similar tattoo, and told her it was a symbol of protection. At the time, Fareeha had assumed that it meant that her mother would always protect her.[4]

Fareeha enlisted in the Egyptian Army. Her dogged persistence and tactical prowess caused her to rise up through the officer ranks. She was a courageous leader and earned the loyalty of all who served under her. With her exemplary record, Fareeha was well placed to join the ranks of Overwatch, but before she had that opportunity, Overwatch was disbanded.

After leaving the army with a commendation for distinguished service, she was offered employment with Helix Security International, a private security firm contracted to defend the artificial intelligence research facility beneath the Giza Plateau. The top-secret facility was touted as vital to the safety of not only the region but countries across the globe. Fareeha gladly accepted the choice assignment and received training in the Raptora Mark VI, an experimental combat suit designed for rapid mobility and devastating firepower.

Pharah within the skies

Under the call sign "Pharah," she worked to safeguard the AI installation. Though she mourned Overwatch's passing, she still dreamed of fighting the good fight and making a difference on a global scale.[2] She was assigned to a strike team under the command of Captain Khalil, with the rank of lieutenant.[4]

Pharah and her squad

When the Anubis AI broke free of containment, Pharah's team was sent in to neutralize the AI. They found a wounded member of the engineers that had been sent ahead, revealing that Anubis had taken control of the sentry bots assigned to the site. Pharah ordered that they move on, despite the protests of Saleh that the engineer needed medical attention. Pharah stated that the mission was more important than any of their lives, given what was at stake if Anubis breached HSI's firewalls. Khalil conceeded the point, but pointed out that Pharah needed to work on her attitude, that the squad was her "family." The team came under attack by security bots, and in the ensuing firefight, Khalil was killed. Per the chain of command, Pharah took command of the squad. Pharah ordered the squad to push on. Anubis had attacked their "family," echoing Khalil's words. The squad entered the temple, and engaged in combat with the security bots. The ordnance caused a pillar to collapse, threatening to crush Tariq. She saved him, much to his confusion—didn't the mission come first? She dismissed the question, and she and her squad held the line while Tariq hacked Anubis's systems. He was wounded, but Anubis was shut down, and the squad exfiltrated the site. As Tariq was loaded into the squad's APC, he told her that Pharah was her captain now, and that he'd always follow her. Pharah reflected on her udjat, and that she'd misunderstood what her mother had told her all those years ago. It did not mean that she was protected, but rather, she was the protector.[4] 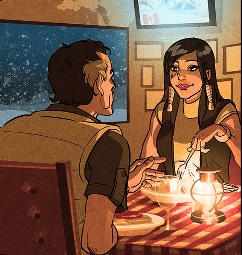 At Christmas,[7] Pharah visited Canada in order to spend the evening eating dinner with her father.[10] 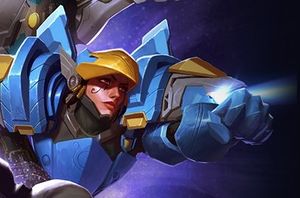 Pharah from the GamesCom 2017 banner 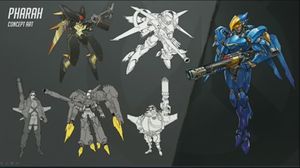 Pharah's design stems from a playable class in the cancelled Project Titan. In the original pitch for the game that would become Overwatch, she appeared as a jetpack-equipped class called Phoenix, which used a rocket launcher and an ability that called down napalm; in a later pitch, Phoenix was reinvisioned as a hero concept with a flamethrower and explosives, while the jetpack and rocket launcher were moved to a new hero that would eventually become Pharah.[15] The design of Pharah was "bottom-up"; where developers start with gameplay mechanics, and later build a character around them.[16] Her original design was done by Geoff Goodman. It was a simple concept of a male hero with a jetpack, simply named "Rocket Dude." Another one of the original concepts was done by Justin Thavirat. More iterations were went through.[3] Her official codename was Rocket Queen.[17] Early in development she was also briefly given the name Mercy; Mercy was named Angelica at the time.[18] 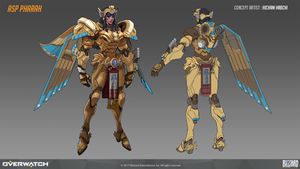 Inspiration for her was taken from the Tribes series.[16] She was one of the first characters implemented in the game, coming in at around the same time of Tracer, Reaper, and Widowmaker (the first three heroes implemented).[17]