Sam[3] is the former partner of Ana Amari and father of Fareeha. He hails from an Indigenous nation on Canada's Pacific Northwest coast.[4]

Sam and Ana became a couple before the Omnic Crisis.[5] The two ended up having a daughter named Fareeha.[6] The relationship between Fareeha and Sam was "complicated," but she spent part of her childhood with him in Canada. The two enjoyed Canadian butter tarts during the Christmas holidays.[7]

Years later, even after she returned from hiding after her supposed death in Poland, Ana kept her survival secret from Sam, stating "I made a big enough mess of his life without having to give him the news."[5]

During Christmas,[8] Sam had dinner with Fareeha, who had traveled to Canada for the holidays.[6] 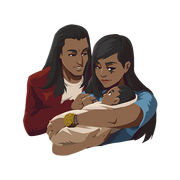