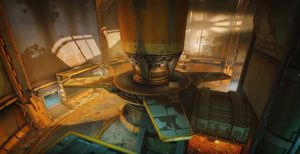 The Scrapyard is an arena in Junkertown, where the Junkers carry out gladiatorial combat.[1] These include mech battles, which are one of the most popular forms of entertainment in the town.[2] Other forms of combat include human vs. human and human vs. omnic matches.[3]

The Queen of Junkertown earned her position through her prowess as a gladiator[4], and her throne is located here.