Brigitte is a Support hero in Overwatch.

Brigitte specializes in armor. She can throw Repair Packs to heal teammates, or automatically heal nearby allies when she damages foes with her Flail. Her Flail is capable of a wide swing to strike multiple targets, or a Whip Shot that stuns [sic] an enemy at range. When entering the fray, Barrier Shield provides personal defense while she attacks enemies with Shield Bash. Brigitte’s ultimate ability, Rally, gives her a substantial short-term boost of speed and provides long-lasting armor to all her nearby allies.

Brigitte is a versatile support hero who specializes in providing armor to allies. Unlike other supports, she is a front-line unit who provides protection similar to tanks rather than staying on the backline. The large healing aura generated by Inspire makes her most useful when her team stays together. Despite her strength in close combat, she has little to no means of harming the enemy at range. If hacked, she has almost no means of helping her team at all.

Brigitte is the youngest daughter[5] of Torbjörn and Ingrid Lindholm,[6] and is a traveling companion of Reinhardt Wilhelm. No longer sitting on the sidelines, Brigitte Lindholm has taken up arms to defend those in need of protection.[5] She is very stubborn, a trait inherited from her father.[7]

Brigitte spars with Reinhardt every day. Afterwards, she and Reinhardt go to a pub or tavern to relax. She likes doughnuts, and loves semlor.[7]

Brigitte was conceived many months before the events of Operation White Dome, where her father lost his left arm and right eye in battle. He would have lost his life as well, if not for Reinhardt's actions. As he recovered in hospital, Reinhardt wouldn't leave his side. Torbjörn became so frustrated that he told Reinhardt that if he left him alone, he could name his daughter. Torbjörn also decided to make him the godfather. Hence, Brigitte received her name, and her godfather.[1]

Brigitte was the first of Torbjörn's children to show an interest in mechanical engineering. Brigitte spent much of her spare time in her father's workshop, learning the trade and honing her skills. Her aptitude for engineering mirrored that of her father's, but Brigitte's primary interest was in armor fabrication and defensive systems, unlike Torbjörn, who was world-renowned (and perhaps infamous) for the weapons he created.[5] As a child, she made a suit of armor for her pet cat (much to its disgruntlement).[8]

Everyone expected that Brigitte would continue her apprenticeship and follow in her father's footsteps. But her plans changed due to the influence of another prominent figure in her life, her father's close friend and fellow Overwatch agent, Reinhardt Wilhelm. A close friend of the family, Brigitte's godfather told her tales of heroes and chivalry as she grew up.[5] When Reinhardt was forced into retirement from combat operations due to his age, Brigitte would learn of it through her father.[9]

After Overwatch's fall, Reinhardt declared that he would become a knight-errant on a quest to bring justice. Before he left on his adventures, Brigitte surprised him by asking to join him as his squire.[5] Interested in adventure, Brigitte wanted to travel around, do good, and getting a chance to make the world a better place.[7] Reinhardt accepted her request.[5] She considered traveling alongside him to be a great honor.[10]

As a squire, Brigitte had many responsibilities, the most important of which was the upkeep of Reinhardt's Crusader armor (a design she was familiar with as the current version was designed by her father).[5] On occasion, they would get into scraps.[11] More and more, she found her main job was taking care of Reinhardt himself, trying to protect him from his over-enthusiasm even as his body was breaking down from years of combat. Eventually, she realized that serving only as a mechanic wasn't enough, and that the best way she could aid Reinhardt was to become a warrior in her own right. While Reinhardt trained her in combat, Brigitte began to build her own suit of armor in secret.[5] Her initial suit was a prototype, made from whatever materials she could find.[7] 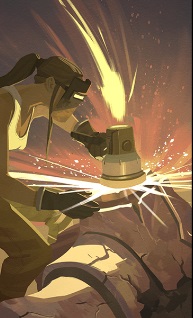 Low on fuel and money, Reinhardt and Brigitte stopped off in a town to obtain some of the former. They discovered it to be akin to a ghost town, and it was revealed to be due to the Dragons, a group of armed scavengers. They encountered the Dragons soon afterwards, and Brigitte was held back as the thugs assaulted her friend, leaving only after Reinhardt had been soundly beaten. Brigitte rushed over to help him as the Dragons headed off to loot another town. Returning to their transport, Reinhardt remained set on helping the people, despite Brigitte's warnings that his armor couldn't handle another battle. Nonetheless, they got to work on its repair, and Brigitte located the Dragons in a factory outside town. Reinhardt engaged the criminals in combat, returning with the declaration that they would not bother the town any longer. Using scrap retrieved from the factory, Brigitte gave Hanna's stuffed toy lion an 'upgrade.'

Their job done, the pair returned to their original goal of picking up fuel.[11] 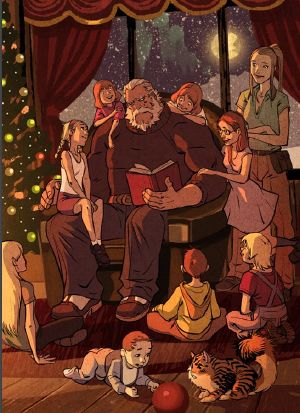 Reinhardt and Brigitte with the Lindholm grandchildren

That same year, Brigitte and Reinhardt spent Christmas at her parents' home, with the latter reading stories to the Lindholm grandchildren.[12]

Brigitte and Reinhardt were in Eichenwalde when they discussed the issue of Reinhardt returning to Overwatch, per a recall order from Winston. Brigitte was against the idea, telling Reinhardt that Winston's message wasn't meant for him. She also expressed a dim view on Overwatch, given how Reinhardt had been forced to retire from the organization in his fifties. Despite her pleading, Reinhardt resolved to heed the recall order.[9] Realizing that Reinhardt believed that he had no choice, she resolved to support her mentor as best she could.[7]

Brigitte finished work on her armor,[5] though continued to refine it.[7] At some point her father added to the design.[10] She began to fight at Reinhardt's side, accompanying him in his return to Overwatch[13], and any others in need as knight and squire journey to make the world a better place, one battle at a time.[5]

Brigitte and Reinhardt arrive in Paris

Null Sector launched an attack on Paris. Brigitte and Reinhardt arrived in their truck, running over numerous Nullifiers to join the fight alongside the Overwatch agents that were already there. The Null Sector Titan fired an energy weapon at the group, but by interlocking their shields, the two of them were able to cause the beam to arc upwards, diverting it away from the Overwatch team. This gave the others enough time to destroy the Titan. In the aftermath, Brigitte greeted Tracer, who commented how much she'd grown. Brigitte was less enthused about Reinhardt saying how "ice" it was to meet Mei, though. In light of their victory, Winston declared that Overwatch had returned.[14] 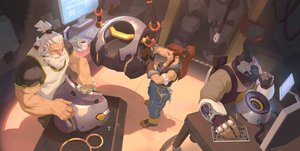 Following the battle in Paris, the team traveled to Watchpoint Gibraltar, where Brigitte took advantage of Winston's technical expertise to enhance Reinhardt's armor, upgrading it to version 09.[15] It would be needed, as Paris wasn't the only target Null Sector had attacked. Brigitte commented that what they'd faced in Paris was only just the beginning.[16] 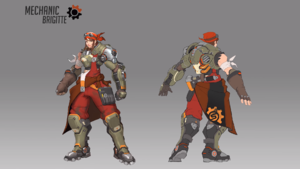 Brigitte was originally designed by Nesskain.[20] When Reinhardt was being developed, the developers "wanted a character who would play Sancho Panza to Reinhardt's Don Quixote." As a result, the concept for Brigitte as a character (if not a hero) existed more or less from the outset.[7]

Because she already existed in lore before work began on her as a hero, the designers already had a good idea as to how to approach her character design. A rough sketch of her as an engineer was submitted. Another design for her was as an actual paladin (nicknamed "the pally") with armor motifs more akin to the fantasy archtype. In this version, a sun crest was on her shield rather than a lion.[21] The lion crest was chosen to look like Reinhardt's, inspired by the idea that a squire bears the arms of the knight they serve.[7] The shield and flail combination was previously conceived as a weapon kit for Wildebeest, Reinhardt's prototype design.[22] The canceled hero concept known as Troy also shared similar abilities. Swords and a more traditional mace were considered for Brigitte, but the developers went with the rocket flail because of its connection to her hammer-wielding inspirations.[7]

In her final design, elements of the paladin remained, but Ben Zhang made the aesthetics a bit more akin to her mechanic design. He reasoned that as Torbjörn's daughter and Reinhardt's squire, her design should take elements from both. Likewise, her role as a tech-based healer also influenced the final design.[21]

Brigitte was announced and added to the PTR on February 28, 2018.[23] When her official page on the website was made public, her age was listed as 28. Lead writer Michael Chu notified fans on Twitter that that version of the bio was outdated and had some incorrect details, including her age.[24] The age was later changed to the current 23 on March 1, 2018.[25] This makes her the second hero in the cast to have a publicly known age adjustment, the first being Mercy.