Snowball is a weather-modification drone and the companion of Mei.

Snowball is a small, blue dome-shaped drone capable of creating isolated flurries of snow and ice, freezing everything and everyone surrounding it. The 'eyes' are shapes shown on an LED screen or an equivalent that serve as a face, changing shape to communicate mood. The screen can serve as a flashlight, show images (e.g. a battery sign) and letters and numbers. It is usually docked on the capsule on Mei's back, and is able to detach itself at will. Snowball moves around by hovering, through the use of three adjustable thrusters for 'feet'. It has a playful and sometimes mischievous personality.[2]

Snowball operated with a team of Overwatch scientists at Ecopoint: Antarctica.[2] Disaster struck the station when it was hit by a polar storm,[3] damaging the station's solar array.[4] Cut off from the outside world, the scientists were left stranded in the damaged facility. As their supplies dwindled, they entered cryostasis in a last-ditch effort to survive until a rescue attempt could be made.[3] Snowball itself entered power saving mode.

The helicopter is a no-go

Nearly a decade later, the base picked up an external transmission, which prompted the pods to be reactivated. However, Mei was the only one who emerged. Upon examining the data she'd collected while she'd been in stasis, she realized that the amount of data was extraordinarily large, and Snowball revealed that she'd been in stasis for nine years. They quickly discovered that Overwatch had been shut down in the intervening period, and that they had no means of contacting the outside world. They likewise soon discovered that the other scientists had perished while in cryo. Snowball did what it could to comfort Mei. She decided that she had to get her data out to the world. However, leaving the base wouldn't be easy, as the satellite dish was broken, a blizzard was raging outside, the snow-crawler was snowed in, and Snowball confirmed that the helicopter was inoperable.

Mei set about creating a device that would repair the dish, so they could listen to the transmission that had been picked up. Close to completion, the base's batteries gave out, which also meant that she couldn't finish the device. Snowball decided on its own to completely drain its batteries to power Mei's workstation, not knowing if Mei could ever recharge it ever again. However, its actions allowed Mei to finish her work, and learn that the transmission had been sent by Winston, issuing a recall for Overwatch agents. Mei left the base by hiking across the Antarctic landscape, now that the blizzard had ended. She carried Snowball on her back, plugged into a charger connected to a portable solar panel. Under the Antarctic sun, Snowball was recharged and 'awoke,' much to Mei's delight.[2]

Mei and Snowball look down on Paris

Snowball was with Mei when she, Winston, and Tracer deployed in Paris to defend the city against Null Sector. With the help of other Overwatch agents, they were able to defeat the invading omnics. In the aftermath, Winston declared that Overwatch had returned.[5] 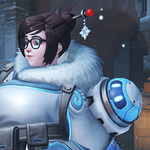 Snowball docked on Mei's back.