Difference between revisions of "Soldier: 76"

Soldier: 76 is an Offense hero in Overwatch.

Armed with cutting-edge weaponry, including an experimental pulse rifle that’s capable of firing spirals of high-powered Helix Rockets, Soldier: 76 has the speed and support know-how of a highly trained warrior.

Type
Ability
Whether he needs to evade a firefight or get back into one, Soldier: 76 can rush ahead in a burst of speed. His sprint ends if he takes an action other than charging forward.
Move. speed:
8.33 meters per second
Duration:
Until cancelled
Details:
Example Video

15 seconds
Type
Ability
Soldier: 76 plants a biotic emitter on the ground. Its energy projection restores health to 76 and any of his squadmates within the field.
Healing:
40.8 health per second
204 health over entire duration
Area of effect:
5 meters
Duration:
5 seconds
Cooldown:
15 seconds
Details:
Example Video

Soldier: 76 is the most well-rounded of the Offense heroes. He's able to deal both sustained and burst damage at any range, move quickly across the battlefield, and support both himself and his team through the use of Biotic Field. His downsides are a lack of any real specialization with his weapons or abilities, no vertical movement, and a less impactful Ultimate when compared to other Assault heroes. He's a simple hero to learn to play, but a difficult one to master, making him a great pick for new players and veterans alike.

Jack Morrison grew up in rural Indiana. The young Morrison has been described in many different ways. He was a rambunctious youth. A humble, salt-of-the-earth farmer's son. But those asked all agree that Morrison was never destined to live out his days in the land of rolling plains and deep blue skies.[2]

At eighteen, Morrison packed his bags and joined the military in response to the Omnic Crisis breaking out across America.[3] He had planned to serve a brief stint in the armed forces and then return home to the family farm, but his work ethic and courage caught the eye of the military brass. Before long, he earned a coveted position in the government's controversial and still-classified (but widely acknowledged) "soldier enhancement program." Military scientists shaped Morrison and other inductees into the perfect soldiers, blessed with superhuman speed, strength, and agility.[2]

Morrison during the Omnic Crisis

Morrison and his fellow augmented soldiers would soon put their abilities to use as the United States was devastated by the conflict. As governments tried and failed to neutralize the omnics, the United Nations was busy forming an international task force called Overwatch. This small, experimental group would bring together the best and brightest from around the world to wage asymmetrical warfare against the robots. Overwatch's short list of prospective agents included two members of the soldier enhancement program: Morrison and Gabriel Reyes, a senior officer. Reyes and Morrison became fast friends, despite their different backgrounds, and decided to join Overwatch together. Leadership of Overwatch fell to Reyes, but Morrison would have a greater impact on the group in the long term. He brought out the best in the people around him and helped mold Overwatch's diverse (and sometimes conflicting) agents into a cohesive fighting force. In unity, they found the strength to defeat the robots and end the Omnic Crisis.[2]

The UN rewarded Morrison for his contributions by making him Overwatch's first official commander. Reyes was passed over in the process, and it created a rift between the two men that would lead to tragic consequences. After the Omnic Crisis, Overwatch experienced a meteoric rise in prominence. New funding and resources gave the now-public organization far-reaching global influence. The world celebrated Overwatch's agents as heroes, but none more so than Morrison. He became the face of Overwatch, a symbol of hope and promise, from the cobblestone streets of King's Row to the sweltering night markets of Bangkok. Morrison envisioned a bright new future for humanity. Under his leadership, Overwatch served as a global peacekeeping force and an engine for innovation, making advances in scientific fields as varied as space exploration and medical research. But even as Overwatch grew in power, Morrison stayed dedicated to the people around him. He trained new agents, instilling in them Overwatch's noble goals and ideals.[2] At some point he was stationed at Watchpoint: Gibraltar.[4]

The public turns on Morrison

It was not to last however. Decades after the Omnic Crisis, Overwatch was shaken by a series of allegations, and its agents became targets of derision for the media.

Seven years before the present day, Morrison faced an increasing public relations nightmare. During a briefing in the Overwatch Headquarters on the 27th day of the King's Row Uprising, Morrison learned that Reyes had Blackwatch agent McCree on the ground in London, where the uprising was occurring; despite orders from the prime minister of England expressively forbidding any Overwatch interference. Jack questioned Reyes if he had any other operatives on the ground, only to be sarcastically brushed off by Reyes. In truth, Morrision wanted to end the crisis in London, but felt tied down by bureaucracy and increasing pressures calling for new leadership. It was not until Cadet Lena Oxton, who Morrision took a special interest in provided Morrison a stirring speech declaring her belief in Overwatch and its mission that Morrison decided to authorize an unsanctioned mission to London to end the conflict.[3] He warned the operatives he sent that the uprising could lead to open war.[5]

Morrison did his best to hold Overwatch together, but he was facing an internal rebellion led by Reyes, whose motives were unknown, but remained bitter that Morrison had been given the position of Overwatch's commander, and the rift that had started there had grown ever since. One year before Overwatch's disbandment, Morrison and Reyes came to blows at Overwatch's Swiss HQ. At some point, their fighting triggered an explosion that destroyed the facility.[2]

A memorial dedicated to Morrison

Morrison was supposedly buried at Arlington National Cemetery. Reinhardt Wilhelm, one of Overwatch's original members, spoke highly of him at his funeral. Statues of him continue to be frequented. In truth, however, Morrison's body was never recovered.[2] He considered the blast the fault of his enemies, and reflected how they believed him dead. A truth, but in his mind, part of him did die that day.[6] 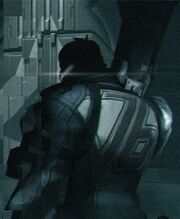 Five years after the end of Overwatch,[7] a series of attacks was made on financial institutions, shadowy corporations,[8] and former Overwatch facilities, all carried out by an unidentified male called "Soldier: 76."[9] in each case where he stole some Overwatch tech. This included Watchpoint: Grand Mesa, where he stole a pulse rifle. Helix Security International personnel attempted to engage him, but 76 escaped apprehension. None of the personnel were killed, though some were treated for non-threatening injuries. One of them stated (under conditions of anonymity) that the assailant possessed strength and speed beyond anything a normal person should possess, and that he likely had military training. The United States turned its attention to apprehending him,[10] and indeed, Soldier: 76 became the target of an international manhunt.

In truth, Soldier: 76 was Jack Morrison. Thanks to his raids, Morrison was now equipped with an arsenal of cutting-edge technology. Here, he used it to wage his personal war to expose the truth behind Overwatch's collapse: to find those responsible, and bring them to justice.[8]

At some point after getting his equipment, Morrison helped foil a heist.[11]

Reports were made that Morrison, still known as "Soldier: 76," was seen in Dorado. This was in the aftermath of his string of attacks within the US, and it was speculated that he had crossed the border into Mexico. A reward of $10,000,000 was offered for any information leading to his capture.[12]

They were reports that were accurate, for within Dorado, Morrison engaged Los Muertos members. He quickly gained the upperhand and forced the thugs to retreat. He tried to pursue, but one of their number lobbed a grenade at a young girl who'd been caught up in the fighting. Torn between the options of pursuit or saving her, Morrison chose the latter, shielding her from the blast and emerging relatively unscathed. With Los Muertos gone, he told her to head home. As he departed into the shadows, she revealed that she recognised him as one of the heroes (of Overwatch) that her mother had told her about. Morrison replied that he wasn't a hero anymore, but she disagreed. Although it appeared that he had simply left, Morrison secretly watched over her from above, making sure she returned home safely to her mother.[13] 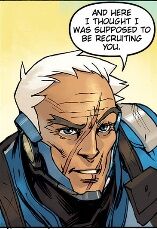 Morrison headed to Egypt to track down a lead on a bounty hunter that had been causing Talon some problems. He knew that the bounty hunter was Ana Amari, and he intended to recruit her. At Giza, he was given what limited information a man named Hakim had on the target. When his contact turned on him, he incapacitated the man, and headed to Hakim's compound. Listening in via a guard's radio, he heard the voice of Gabriel Reyes on the other side. He vaulted the compound's wall, incapacitating another guard, and demanded to know where Reyes was. Reyes turned up, now the individual known as Reaper, and took Morrison by surprise, shooting him in the back. However, before Reyes could finish Morrison off, he was shot at by Ana, who managed to heal Morrison through her biotic rifle. Morrison and Reyes engaged in a fist-fight, and while Reyes was able to again best him, his confrontation with Ana prompted him to retreat.

The reunion between Ana and Morrison was strained—the latter was agrieved that she hadn't contacted him to let her know that she was still alive, the former possessing little interest in Morrison's personal war. Nonetheless, Ana agreed to help him, but asked what Morrison would do when the fighting was over. Morrison responded that he was a soldier, and that his war would never end.[14]

After reuniting in Egypt, Ana and Morrison spent Christmas together.[15] 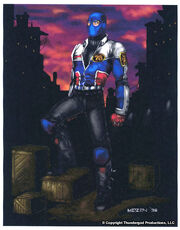 Soldier: 76 was designed using a top-down approach, where developers started with the flavor/story/art side of the subject and built mechanics around it. The original concept was pitched by Chris Metzen, and the team instantly got onboard. From there, lead concept artist Arnold Tsang, Metzen and art director Bill Petras worked together to finalize a character concept. By this stage, the developers had the idea of making 76 a "normal rifle guy," in regards to his gameplay style. Few problems were encountered during development, and only his heal ability changed.[22] It was intended that he be easy for players from other FPS games to play, allowing them to ease into Overwatch before moving onto more exotic heroes.[20] Metzen leveraged Soldier: 76 as a "fulcrum point" of the story/setting. He is said to represent Overwatch at its greatest.[23]

Morrison's visual design differs from his initial appearance during and after the Omnic Crisis, and how he appears in the game itself. This was intentional on the developers' part, as they wanted his visual design to reflect how his state of mind has changed over the years.[22]

Soldier: 76 was a comic book series concept by Chris Metzen. Morrison's design was inspired by the title character—Metzen wanted to see what the development team would do with the character. Morrison shares a lot of broad themes and motivations with the comic character, but the details of the characters' lives differ greatly.[22]