Sombra is a Damage hero in Overwatch.

Stealth and debilitating attacks make Sombra a powerful infiltrator. Her hacking can disrupt her enemies, ensuring they're easier to take out, while her EMP provides the upper hand against multiple foes at once. Sombra’s ability to Translocate and camouflage herself makes her a hard target to pin down.[3]

Stealth and debilitating attacks makes Sombra a powerful infiltrator. Her hacking can disrupt her enemies, ensuring that they're easier to take out, while her EMP provides the upper hand against multiple foes at once. Sombra’s ability to Translocate and camouflage herself makes her a hard target to pin down. She lacks alternative means of dealing damage, so using Opportunist and Hack can help even the odds between Sombra and her opponents.

One of the world's most notorious hackers, Sombra uses information to manipulate those in power.[3]

Sombra's skills include computer hacking and cryptography;[4] these are activities she greatly enjoys, to the point where the desire to get past locks and solving mysteries is ingrained in her personality.[5] She is a known associate of Reaper, specializing in espionage and intelligence assessment.[6][7] She is equipped with devices that allow hacking of technology just through touch. This includes a cybernetic graft implanted along her spine.[8] which basically makes her a living computer.[5] She is a loner emotionally, finding it difficult to make friends[9] (outside coercion).[10] Her personal calling card is a sugar skull.[1]

Long before she took up the alias "Sombra," Olivia Colomar was among the thousands of children who were left orphaned in the aftermath of the Omnic Crisis. With much of Mexico's infrastructure destroyed, she survived by utilizing her natural gifts with hacking and computers.[3] She likewise proved adept at manipulating individuals to suit her own ends.[8] 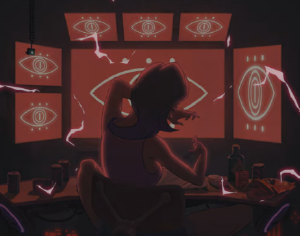 After Colomar was taken in by Mexico's Los Muertos gang, she aided it in its self-styled revolution against the government,[3] performing hacks against said government on their behalf.[11] Los Muertos believed that the rebuilding of Mexico had primarily benefited the rich and the influential, leaving behind those who were most in need of assistance.[3] Commissioner Rivera was one such example, when she brought him a basket of bread straight to his desk, which gave her the opportunity to access his computer. She came to realize that knowledge was power, and so, she kept hacking—politicians, corporations, governments,[8] famous people;[5] all were in her domain of inquiry. The retrieval of information became an addiction,[8] and her hacks became more audacious over time.[5] Following her many conquests, Colomar was supremely confident in her skills, but she was caught unprepared when she stumbled into the web of a global conspiracy—one that had also noticed her. With her security irreparably compromised, Colomar was forced to delete all traces of her identity and went into hiding.[3]

Colomar received a cybernetic graft and re-emerged as "Sombra." In her words, "the girl was gone."[8] Determined to find out the truth behind the conspiracy she had uncovered[3] to "find out who really runs the world,"[8] Sombra launched an even more audacious string of hacks,[3] initiating a world-wide hacking spree,[12] striking against governments, organizations,[1] and corporations such as LumériCo and Volskaya Industries.[5] Her exploits earned her no shortage of admirers, including Talon. She joined the organization's ranks and is believed to have contributed to its massive cyber-attacks against corporations with strong ties to their governments.[3] While in Talon, she met a combat medic named Baptiste, and over time, the two became close friends. While Baptiste ended up leaving Talon, she kept an eye on him, interested to see what her old friend was getting up to.[13]

What You Left Behind

A few days after the Overwatch recall order, Baptiste contacted Sombra. He requested her aid in contacting Dr. Angela Ziegler, to warn her that Talon might be targeting her.[14]

Still with Talon[3] Sombra worked with Los Muertos again, and was able to hack the website of LumériCo, posting claims that its CEO, Guillermo Portero, was plundering the riches of Mexico to fill his own purse, that he had corrupted the government, and wouldn't stop until the entire country was under his control.[15] Sombra was able to infiltrate Portero's personal email, and use it without Portero knowing about the intrusion. She sent out an email via Portero's own webmail, promising to unveil his "dirty laundry" to the public.[16] Sombra successfully released a number of internal documents to the public, catching the attention of both Mexican law enforcement and Atlas News. The documents indicated that Portero used the company's funds as his own piggy bank, that he was personally involved in bribing public officials and creating a system of kickbacks and payoffs beneficial to LumériCo, and finally, that he proposed a plan to seize privately held land via government expropriation to expand LumériCo's facilities throughout Mexico. The emails also showed that LumériCo was in conversations with the Vishkar Corporation, in regards to exporting its energy systems; a cause of concern given the company's actions in Rio de Janeiro.

Law enforcement categorized the break-ins as a criminal action, and Atlas News reported on the "Sombra collective," mistaking Colomar's identity as a group, not an individual. Sombra claimed that she was "only acting the public interest."[17] Her efforts incited a popular revolution in Mexico against LumériCo,[3] and pro-Sombra grafitti was reported across the world. Less than a week after the leak, Portero stepped down as CEO. By this point, Sombra was already hacking the network of her next target—Volskaya Industries.[18] 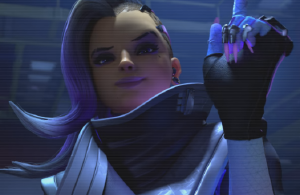 Sombra, with Widowmaker and Reaper, infiltrated Volskaya Industries to assassinate it's CEO, Katya Volskaya. Sombra deactivated the security alerts and turrets within the facility to allow Reaper and Widowmaker access. The mission appeared to go without a hitch, Widowmaker was unable to get a clear line of sight before the operation was interrupted by an alarm—one that Sombra had set off herself. Widowmaker held the perimeter while Reaper cleared the ground floor, he was unable to get to Katya in the elevator and was forced to confront a mech as she fled to safety. Sombra gave chase, killing and incapacitating Volskaya guards, until she made it into Katya's lock-downed office. While ostensibly there to kill the CEO, Sombra played a different game, revealing her intentions to be Katya's "friend." A friend with benefits, for if Katya helped her out from time to time, she wouldn't leak evidence that Katya had been receiving technology from omnics in order to help her country in the Second Omnic Crisis. Sombra also noted how exposure would affect "the future of Russia" while handing Katya the photo of her daughter from her desk, hinting at how the fallout of a scandal would impact her.[10] Sombra's motives for gaining Katya as an informant was to help her uncover the greater global conspiracy she had discovered.[1] As her security was nearly through with getting the door open, Katya agreed to the terms, and Sombra teleported out of the office, reporting to her comrades that the operation had failed. The Talon operatives returned to the ship, with only Sombra in good cheer.[10]

Sombra and McCree at Calaveras

Sombra spent Christmas drinking at the bar in Calaveras.[19] 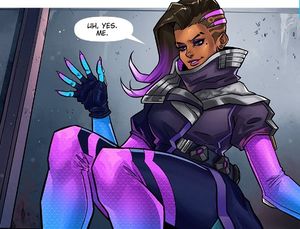 Katya, not keen on being Sombra's 'friend', dispatched Russian soldier Aleksandra "Zarya" Zaryanova to track her down. Alongside the omnic Lynx Seventeen, Zarya caught up with Sombra in Dorado. The two exchanged words and bullets, but Zarya was able to incapacitate Sombra through a graviton surge. Sombra warned Zarya that if anything happened to her, Katya's secrets would be revealed to the world, including her dealings with omnics. Zarya in turn revealed that she knew Sombra's real name, which briefly fazed the hacker. However, Sombra maintained that she wanted Katya to remain in power, as she wanted her as a source for information. However, the conversation reached its end as Lynx collapsed (as Sombra had hacked them in Numbani when they'd tried to trace her), and revealed that the warehouse they were in would be destroyed in an explosion in one minute. Zarya rescued Lynx and let Sombra live.[1]

Sombra's existence has been hinted at since early pre-beta builds of the game.

Following the announcement of Ana as the 22nd Overwatch hero, a series of cryptographic puzzles about Sombra were slowly released, dubbed the Sombra ARG by the community. 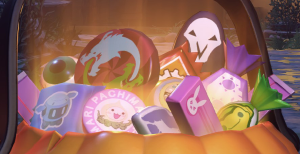 Close up of Halloween Terror candies. 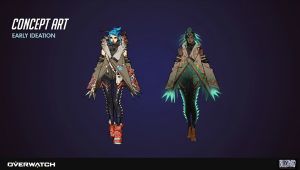 Early concept art of the Omniblade (left) and Sombra (right).

Sombra originated during the game's early development as a proposed character called the Omniblade, an agile female ninja who would wield shuriken and kunai, predating Hanzo and Genji. As ideation progressed a Mesoamerican theme was incorporated into her design and she was given the name Sombra, however the concept was shelved when they began incorporating elements of her suggested kit, including a double jump and throwing knives that could reveal enemies through walls, into the two new ninja heroes. 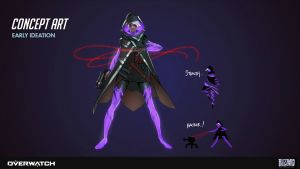 Early concept art of Sombra as a stealth hacker

At a later point they conceived of a stealth hacker hero and decided to use the earlier Sombra concept as its foundation. Having previously attempted to build Genji as a slow-moving stealth assassin character and finding it to be unfun, they decided to instead make Sombra an agile infiltration hero focused on gathering intel and disrupting the enemy team, devising her thermoptic camo suit, hacking tendrils, and machine pistol, lending the character a cyberpunk aesthetic. Elements of her new kit seem to have been pulled from the playable Spec Ops class from the initial pitch for Prometheus, which had stealth and EMP abilities, as well as Hivemind, a proposed hero created for the Prometheus pitch meeting with abilities called Disable and EMP pulse.[34] At this point in development Sombra had a hood and a longer coat, however her silhouette began to overlap with the also in-development Ana, so they decided to steer her in a different direction, eventually arriving at her final design.[5]

Initially, Sombra was invisible 100% of the time. This concept generated two problems however. It reduced the sense of Sombra helping her own team (per friendly players not seeing her), and inflicted stress on the enemy team, not knowing if they were safe. Additionally, what she could and couldn't hack went through numerous revisions. She started off as a Support hero, and initially, there was no cooldown for her hacking abilities.[9] 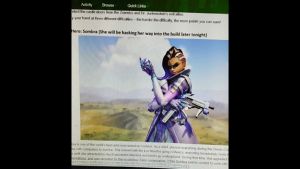 Prior to the reveal of Ana as the 22nd playable hero in Overwatch, a photograph of Ana wearing her Shrike mask found on Temple of Anubis was incorrectly identified as Sombra, leading to a widespread assumption that the two characters were one and the same, and that Sombra was the rumored in-development support sniper character.[35][36][37]

Voice lines extracted from the Public Test Region after Ana's release featured the first suggestions that Sombra would have a stealth ability.[38] On October 8, 2016, a photo of a posting on Blizzard's enterprise social network was leaked online, containing the details for an internal test build featuring the Junkenstein's Revenge event and Sombra, including a screenshot and her bio.[39] 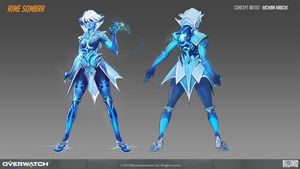 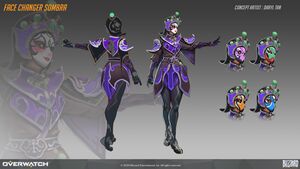 On November 1, 2016, the image urls for unreleased Blizzcon 2016 fine art prints of Sombra and a Diablo III necromancer, hosted on Blizzard's gear store, were leaked, seemingly corroborating the earlier October 8 leak.[40] She was officially announced at BlizzCon 2016 as the 23rd hero.