Symmetra is a Damage hero in Overwatch.

10 seconds
Type
Ability
Symmetra places a temporary teleporter exit pad at a distance and connects it to a teleporter entry pad at her current location. Allies (and some of their abilities, such as Junkrat’s RIP-Tire) can travel from the entry pad to the exit pad instantly.
Health:
50 health
250 shields
Healing:
Regenerates 30 shields per second, after avoiding damage for 3 seconds
Max. range:
30 meters (placement)
40 meters (max. absolute range)
Area of effect:
1.5 meter (interact range)
Casting time:
2 seconds (deployment)
Duration:
∞
Cooldown:
10 seconds
Create two teleporters that enable instance travel between them.
Details:

Sentry Turret's damage per second is 30 instead of 40.

Symmetra's abilities provide both defensive and positional advantages to her team. She can cover chokepoints with her Sentry Turrents, deploy a Teleporter to provide teammates higher ground or ambush the enemy team, and split the map in half with her Ultimate. Her low health and mobility means that she must coordinate with her team in order to survive.

Photon Barrier (Ultimate): Symmetra sets up a barrier that cuts the map in half.

"The true enemy of humanity is disorder."

Symmetra literally bends reality. By manipulating hard-light constructs, she crafts the world as she wishes it to be, in hopes of engineering a perfect society. Symmetra believes her actions serve the greater good in society, though there are times when she wonders whether the control and order she desires are truly best for humanity.[1] Symmetra is on the autism spectrum;[2][3] She has demonstrated traits associated with the condition such as having trouble with social interactions, suffering from sensory overload and preferring environments that are structured and harmonious. While Symmetra does not hesitate to carry out missions of dubious morality for her company (such as digging up blackmail material to sabotage competitors), she dislikes killing and only resorts to lethal force if she has to.[2]

Satya Vaswani grew up in Hyderabad, India. By her recollection, it was not a pleasant environment to grow up in.[2]

Following the Omnic Crisis, the Vishkar Corporation of southern India began the laborious process of creating new, self-sustaining cities to house the nation's displaced population. One such city, Utopaea, was created using radical hard-light technology that enabled its architechs to shape the city's streets, utilities, and living spaces in the blink of an eye.

After she was identified as one of the few capable of becoming a light-bending architech, Vaswani was plucked from extreme poverty and placed in the care of Vishkar's Architech Academy, never to return home. Isolated and lonely in her new life, Vaswani immersed herself in her education and training. She quickly grasped the applications of the technology and was one of the top students in her class. Vaswani approached hard-light manipulation differently than her peers, with their more procedural, mechanical constructions, instead weaving her constructs in the motions of the traditional dance of her homeland.

Though she was one of Utopaea's top architechs, the Vishkar Corporation saw far greater potential in Vaswani's abilities. Giving her the moniker "Symmetra," Vishkar sent her on clandestine missions around the world to uphold its corporate interests and expand its influence into other countries.[1]

Vaswani in the mayor's office

Vaswani was present in Rio de Janeiro as Vishkar tried to secure a deal with the mayor to re-develop the city's slums with its hard-light technology. However, the mayor favored a deal with Calado, a prospect that left Vaswani frustrated, as she believed Calado's proposal to be inferior and impractical. Storming out of the mayor's office, she came across a crowd of protesters who were against the re-development of their neighborhoods. Due to her own childhood experiences, Vaswani couldn't understand how they could bear to live in such "disgusting" conditions. As she tried to navigate through the protesters, she became overwhelmed by the sounds and the smells, leading her to lose her way. Then, a young girl called out to Vaswani and offered to guide her back to her hotel. Motivated by the encounter, Vaswani vowed that Vishkar would secure the deal and help Rio's people, no matter what. 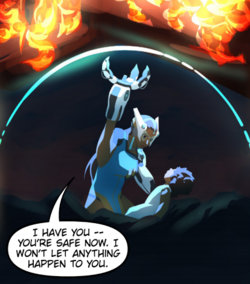 That night, Vaswani, on the orders of Sanjay Korpal, infiltrated the Calado building to find information Vishkar could use against him. Breaking into Calado's vault, she managed to find some compromising material, but nothing substantial. Vaswani was then discovered by Calado's guards, but she created a barrier to deflect their shots, following which she used her photon projector to drain their energy. Sanjay questioned why she didn't just kill them, but Vaswani insisted she only resorted to lethal force if she had to. She subsequently escaped the building, with her pursuers being impeded by traps she had set up in advance.

Outside, Vaswani contacted Sanjay, confirming that she didn't have enough on Calado to bring him down and suggesting they try to get to the mayor instead. Sanjay simply responded with "so be it," and a second later, the Calado building was consumed in a fiery explosion. While Sanjay explained that Calado wouldn't stand in their way, Vaswani stared in shock as the building collapsed, with debris falling into the adjacent slum that she had passed through earlier that day. Vaswani made her way down to the favela, which had become enveloped in flames, and spotted a woman that was pointing towards a house while crying for help. Realizing there was still someone inside, Vaswani used her photon projector to forge a path and protect herself from the fire. Eventually, she found the young girl from before, trapped underneath debris, and freed her. Upon carrying her back to her mother, Vaswani realized the girl's face had been severely burnt and feebly hoped Vishkar could "fix it," along with the favela.

A few months later, the situation had indeed been "fixed," as Vishkar had carried out its redevelopment of Rio's city center, now that Calado had been taken out. Standing with Sanjay as the mayor gave a speech, Vaswani observed that new housing had yet to be provided. Sanjay affirmed that "appropriate" housing would be provided in time, to which Vaswani responded by questioning whether the favela's destruction by fire had been intended by Vishkar. To this, Sanjay stated it was "the price of rebirth and growth." Looking out over the crowd, Vaswani tried to convince herself that Vishkar was indeed, making a better world.[2] 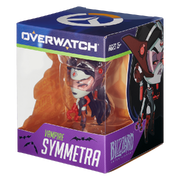 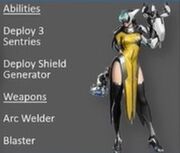 Symmetra's design originated as a playable class called the Architect in the cancelled Project Titan. In the original pitch for the game that would become Overwatch, she was envisioned as wielding an arc welder and blaster, and could deploy sentry turrets and shield generators. In a later pitch she was given "orb buffs," which were ultimately given to Zenyatta. Her arc welder and blaster were later changed when the idea of hard light constructs were incorporated into her design. Her teleporter was taken from the Engineer class, which served as the basis for Torbjörn, and she would eventually receive the Architect's shield generator as a second ultimate in Overwatch.[10]

Symmetra's backstory was expanded through the development of Lúcio, as his backstory includes involvement with Vishkar as well.[11] Symmetra being autistic was initially hinted at in the "A Better World" comic, and later officially confirmed by a letter from Jeff Kaplan to a fan.[12]

Developer Comment: We're reducing the cooldown of the Teleporter to help lower the friction between needing to use it as both a personal and team-focused mobility tool.

Developer Comments: We wanted to address two main issues with Symmetra. First, on the whole, we felt that she didn’t feel active enough. Second, due to the nature of her Teleporter, she felt weak in certain situations on different maps and game modes. To address the first point, we replaced her more passive Photon Shield ability with a much more active ability: Photon Barrier. Now, Symmetra can help lead the charge on offense or help shut down a big push on defense by actively blocking damage for your team. For the second point, we noticed players would often switch off of Symmetra once they found themselves in a situation where her Teleporter wasn’t as useful. For example, when playing her on defense on an Assault map, players often used her to defend the first capture point, then quickly switched to another hero if that point fell. To help her feel more useful in more situations, we've given her an alternative to her Teleporter. The Shield Generator is just as important for the enemy to deal with, but is useful in more situations. The turret changes allow her to rebuild her turret nests faster. Even if all her turrets are wiped out, it's now easier for players to build them all back up before the next push. We’re also increasing the range on her Photon Projector to make it easier for her to build up and keep a powerful charge on her target.

Developer Comment: Game-changing ultimate abilities were coming up a bit too frequently. This change helps keep them in check while still allowing them to be powerful.

Developer Comments: Altering the size of projectiles in flight had too many unintended side effects to keep in the game, at least in its current form. We will continue watching this and make additional changes if necessary. We’re also making quick melee more consistent when interacting with enemy abilities.