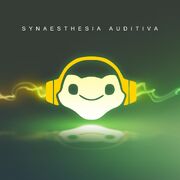 Synaesthesia Auditiva is the debut album of Lúcio, which he spent two years working on. Prior to release, he teased two of the album's tracks, which went to the top of the charts. Previews of the teased songs surpassed interest in his breakout single from the previous year, Sonhos Ômnicos.[1]

A world tour was scheduled to promote the album, set to begin in Cologne, Germany. Atlas News conducted an interview with the composer prior to the tour. By the time of the interview, next Wednesday's opening show in Cologne had already sold out. Lúcio stated he intended to provide a holostream service for viewers at home.[1] The album was a global hit.[2]