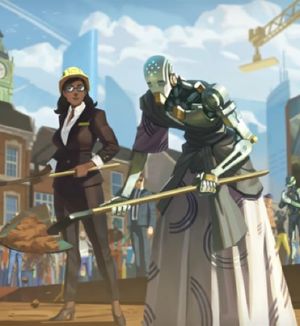 Seven years after the Uprising, Mondatta was again in King's Row. Under tight security, he addressed a joint human-omnic crowd. However, he was assassinated by Talon operative Widowmaker, despite Tracer's efforts to stop her.[8] In his memory, a large statue was built at King's Row, and a memorial picture was placed on the stairs in front of The Meridian, where he gave his final speech.[9] Talon's involvement remained unknown within the press.[10]