Timmy[2] is a young fan of Overwatch.

One day, Timmy and his brother, Brian, visited a museum dedicated to Overwatch. Timmy was enthralled by everything, even as his brother remained apathetic. What he wasn't apathetic to, however, was the sight of Winston and Reaper crashing down through the ceiling, and Tracer and Widowmaker engaging in a gunfight. Brian got him to cover, and Timmy was enthralled to see Tracer up close. As the battle progressed, the Talon operatives gained the upperhand, and it looked like their target (Doomfist's gauntlet), would fall into their hands. Brian stole it from its case, and hid from Widowmaker. Timmy yelled "watch out," distracting her, giving Brian the opportunity to punch her with the weapon, sending her sprawling. The tide of battle turned into Overwatch's favor, and the Talon agents were forced to retreat. Winston gave chase, and so did Tracer, but not without looking down at the two boys, telling them that the world could always use more heroes. After seeing such a display, Timmy exclaimed "that was awesome!"[3] 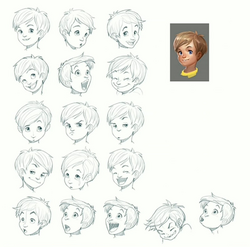