Torbjörn is a Damage hero in Overwatch.

Torbjörn’s extensive arsenal includes a rivet gun and hammer, as well as a personal forge that he can use to build turrets.

Torbjörn is the tool-tip damage-dealer that has most abilities which are useful for protecting (zoning) an area. His Rivet Gun is a very dangerous weapon due to its high damage, but its main weakness is arcing in mid- to -long range. His turret is his main tool for zoning an area, as he can deploy it anywhere and let it automatically build itself to help him in a fight. Forge Hammer can be used to deal damage at close-range or repair his damaged turret. Overload is a power-up to himself, giving more maximum health with armor and enhancing offensive powers. Molten Core is a great area-denial ultimate that can force the enemies to walk back before being burnt to death on a high-damage magma floor. Given all these, he still has major weaknesses. Other than Overload, he lacks any means of increasing his mobility. When unable to deploy his Turret to help him in a fight, his full power will be greatly reduced. Despite having the shortest model of all heroes, he possess one of the largest hitboxes of his class, making him vulnerable to a weapon with a large spread. He is best at zoning, but weaker at flanking and fighting aggressively.

Torbjörn Lindholm (called "Torby" by his friends)[4] is one of the greatest weaponsmiths and engineers in the world.[5] He has a low opinion of omnics, believing them to be incapable of empathy, instead acting purely on logic,[4] and disagrees with giving them the same rights as humans.[6] "Allt är inte guld som glimmar" (All that glitters is not gold) is one of his favourite phrases.[7] 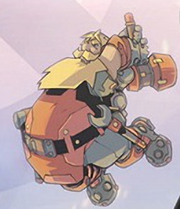 Torbjörn during the Omnic Crisis

Before the Omnic Crisis, Torbjörn had gained notoriety for designing weapons systems used by countries around the world. However, his belief that technology must serve a better vision for humanity put him at odds with his employers, who desired to control his weapons using networked computer intelligence.[8] At some point he worked with the Ironclad Guild, where he worked in R&D.[8] He also helped design the E54 Bastion unit.[9]

Torbjörn had a deep mistrust of sentient robotic intelligence, and while many of his peers wrote this off as paranoia, his worst fears were realized when the robot populations of the world turned against their human creators during the Omnic Crisis. Because of his engineering genius, he was recruited to join the original Overwatch strike team, and his many inventions proved integral to ending the conflict.[8]

During or after the Omnic Crisis, Torbjörn took part in Operation White Dome, where he and other Overwatch members were deployed to Istanbul to deal with entrenched omnic forces. As soon as they landed, the omnics opened fire, and while the robots were defeated, Torbjörn was seriously injured,[1] losing his left arm and right eye.[10] Reinhardt Wilhelm was able to save his life however.[1]

After the battle, Torbjörn was taken in for medical treatment. Young family friend Angela Ziegler was able to visit him, which pleased him greatly. On the other hand, Reinhardt stayed by his bedside, being a source of constant irritation. Half in jest, Torbjörn told him that if he shut up, he would be allowed to choose the name of his upcoming daughter, and that Ingrid would agree to it. In truth, Torbjörn had already considered naming Reinhardt as his daughter's godfather, but that aside, Reinhardt agreed to the terms. After this, Torbjörn wrote to his wife, assuring her that he was okay, and that he would design a prosthetic arm to replace the one he lost in Istanbul. He told her of the deal he had made with Reinhardt, hoping that it would be okay with her. He further hoped that he would be home in Gothenburg before she gave birth.[10] 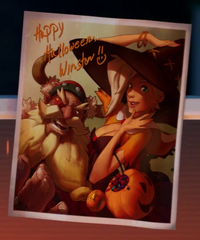 Torbjörn in a viking costume with Mercy on Halloween

In the years that followed, Overwatch became an international peacekeeping force, and Torbjörn remained a critical resource for all of its technological needs and signature weapons systems. At its height, Overwatch possessed one of the most advanced armaments on the planet, which could be traced to Torbjörn's work.[8] This included the development of biotic technology, including the biotic rifle, which was intended to heal Overwatch medics in the field. This device led to some disagreement with now Overwatch agent Dr. Ziegler, who warned that the rifle was setting Overwatch on a dangerous path to weaponizing biotic technology.[11] He also designed the armor components of her Valkyrie suit.[7]

During his Overwatch years, he once dressed as a viking for Halloween.[12]

Torbjörn en-route to London during the King's Row Uprising

Seven years before the present day, Torbjörn was part of an unsanctioned mission authorized by Strike Commander Jack Morrison to end the King's Row Uprising in London, England. While preparing to board an aircraft, Torbjörn gruffly remarked that "the cavalry's here" after seeing Cadet Lena Oxton blink in front of him. Tracer liked the phrase, and decided to keep it.[13]

Some time after that, Reinhardt, whose Crusader armor Torbjörn maintained and got along well with, was faced with mandatory retirement from combat operations, having served into his late fifties. Torbjörn, only four years younger than him, was particularly incensed that the organization simply "pushed Reinhardt out" after giving everything of himself in years of service. The Swede would not forget the incident, and related the unfairness of it all to one of his youngest daughter, Brigitte.[14]

When Overwatch disbanded, Torbjörn entered retirement, returning to Gothenburg and Ingrid.[7] However, in the aftermath of Overwatch's fall, many of Torbjörn's weapons were stolen or stashed away around the world. Feeling responsible for his creations, Torbjörn was determined to stop them from falling into the wrong hands and wreaking havoc on the innocent.[8] Round about the same time, Reinhardt (who had been forced to retire from Overwatch) declared that he would become a knight-errant on a quest to bring justice. Brigitte asked to join him and Reinhardt accepted.[15] Torbjörn knows that his daughter shared his stubbornness, and while his bigger concern was that Reinhardt and Brigitte were in over their heads, he ultimately supported their decisions. Plus, there was no-one better to look after his daughter in his mind.[16] 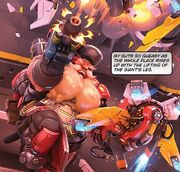 Torbjörn received word that a single omnic had attacked the city of Boklovo. He thought little of it at the time, but when he arrived the following day, he saw that it was nothing to scoff at. The omnic was a Titan; one that was rampaging through the city, and shrugging off everything the Kurjikstani military threw at it. He was bitterly reminded that the Titan was a device he had originally designed to aid in city construction, before it had been hijacked by the omnics during the Omnic Crisis and turned into a city-destroyer. But despite the alterations, it was still his design, and that allowed him to bypass its infrared detection systems and gain access to the walker's interior. Once inside, it was revealed that Sven, an old friend of his, was piloting the mech. The two verbally sparred as Torbjörn fought his way up to the walker's cockpit. Sven presented himself as some kind of arbiter of justice, but Torbjorn claimed that he was nothing but a war profiteer. Upon reaching the cockpit, he easily incapacitated him. He subsequently shut down the mech.[4]

When Winston issued a recall of Overwatch agents, Torbjörn was in northwestern Russia.[17]

Torbjörn, ready to hunt a Bastion

With the report of a Bastion unit in northern Sweden, Torbjörn attended a meeting of locals who were discussing the incident. While the Swedish government believed the reports to be a hoax, a speaker at the event declared that they should take matters into their own hands. Torbjörn interrupted the meeting, pointing out that the rifles they had would be useless against the automaton. He pointed out that as the unit hadn't attacked anyone yet, its self-repair function was probably damaged. A broken bot was something that he could handle. He told the townsfolk to give him a few days, and to stay put while he sorted out the unit.

Torbjörn headed out into the forest. Despite his earlier words, he was followed by an official, who wanted to make sure the job was done by the book. He revealed to Torbjörn that he'd done some digging, and had discovered that Torbjörn had helped design the E54 Bastion before the Omnic Crisis. They successfully lured the robot out, but a bird landed on their intended bait. Sighting the Bastion, the official opened fire, and the Bastion retreated. Torbjörn was skeptical as to the official's claims that the Bastion had been scared off, for in his experience, Bastions didn't retreat. The official headed off into the forest alone, confident that he and the police could handle it, despite Torbjörn's warnings. Torbjörn went his own way, mulling over what he'd just seen. Before long, he found the robot again, helping beavers build a dam. Perplexed, Torbjörn tried to goad the robot into attacking, but it just stared at him before offering some wood. Torbjörn realized that this Bastion was different from the automatons he'd fought in the past.

The moment was interrupted by the official and the police he'd brought with him, who opened fire on the unit. Torbjörn told them to stop firing, that the Bastion wasn't aggressive, and that they had to call off the hunt. The official was having none of it, and ordered the police to restrain him. Torbjörn was one step ahead of them, and incapacitated the guards using the device he'd originally intended to trap the Bastion with. He headed off into the forest. Eventually, he found the Bastion again, and the two headed off together. Torbjörn warned that they weren't friends, that if it pointed a gun at him, it would be slag. And that it had to stop playing with every animal it came across.[9]

Bastion ended up living with Torbjörn, who upgraded the omnic.[18] Among the upgrades was a new set of armor.[19]

Torbjörn spent Christmas with his family and Reinhardt.[20][21]

Alongside Bastion, Winston, and Tracer, Torbjörn watched an ad for Blizzard World. After Tracer rushed off (presumably to visit the park), Torbjörn let out a "for the Horde" exclamation.[22] 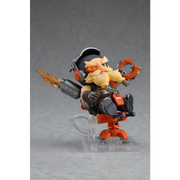