Difference between revisions of "Tracer"

Tracer is an Offense hero in Overwatch.

12 seconds
Type
Ability
Tracer bounds backward in time, returning her health, ammo and position on the map to precisely where they were a few seconds before.
Healing:
Changed to the value
3 seconds earlier
(Unless lower than value before activating)
Duration:
1.25 seconds rewinding
Rewinds 3 seconds back
Cooldown:
12 seconds
Details:
Example Video

Tracer is a close-range skirmishing hero who specializes in speed and single target damage. Her mobility and high single target damage makes her excellent at picking key targets with very low risk. Tracer can quickly traverse a map with the use of Blink to outflank her enemies, deal damage to them, and then retreat before they have a chance to respond. Her low base Health and lack of regenerating shields means that she must make good use of Blink and Recall to avoid or reverse damage.

She was a great admirer of Tekhartha Mondatta,[6] and was inspired by Mei, an Overwatch scientist.[7]

Overwatch's doctors and scientists were stumped, and Tracer's case seemed hopeless until a scientist named Winston designed the chronal accelerator, a device capable of keeping Tracer anchored in the present. In addition, it gave Tracer the ability to control her own time, allowing her to speed it up and slow it down at will.[3] The effects of the accident also gave Tracer unique ageing properties.[8] 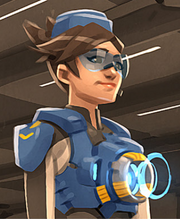 Seven years before the present day, after the incident, Tracer underwent training to become an Overwatch agent, and trained under the supervision of Winston and Dr. Ziegler at the Overwatch Headquarters' Training and Evaluation facility, where she sparred against Blackwatch agent Genji. Under supervision, Dr. Ziegler commented on how if no setbacks occurred, she was fit for active duty; a sentiment Winston agreed with. On the 27th day of the King's Row Uprising, Strike Commander Jack Morrison was impressed by Lena's skills with her chronal accelerator. Summoning her to his office, Morrison stated how he was impressed by her determination to stay with Overwatch despite her recent accident. Noticing images of London burning on a viewscreen in Jack's office, Lena commented on her belief in Overwatch's mission. After confiding in Lena his motivations in joining Overwatch, Jack dismissed Lena with the implied knowledge that he approved her request to be promoted to active duty.[9]

Lena Oxton then appeared at an Overwatch aircraft where Dr. Ziegler, Torbjörn, and Reinhardt Wilhelm were preparing to embark on an unsanctioned Overwatch mission authorized by Jack Morrision, who was moved by Lena's words to end the Kings Row Uprising in London. Ziegler told Lena how the team was invested in her career, and how Jack was fond of her. Reinhardt welcomed her to the team, and Torbjörn grudgingly referred to her arrival by saying, "look's like the cavalry's here." A phrase which Lena took a liking to.[9] The team fought their way through the streets, even as hordes of Null Sector omnics tried to bar their way.[10] Null Sector was defeated, but the events that transpired were classified within Overwatch's archives.[11]

With her newfound skills, Tracer became one of Overwatch's most effective agents.[3] At some point she was stationed at Watchpoint: Gibraltar.[7]

Alongside Winston and Genji, Tracer battled Doomfist. Her agility and speed couldn't be matched by Doomfist, but her pulse pistols had little effect on the man, either being deflected by his gauntlet, or bouncing off some kind of shield. She was caught off-guard when Doomfist suddenly grabbed her chronal accelerator in mid-air and crushed it in his hand, causing Tracer to blink rapidly, and vanish. Following her disappearance, Winston became enraged and defeated Doomfist in a close quarters clash. Tracer's chronal accelerator was repaired or replaced sometime after.

After Overwatch's dissolution, Tracer continued to right wrongs and fight the good fight wherever the opportunity presented itself. [3]

Years after Overwatch's disbandment, Tracer was contacted by Winston as he issued a recall order for Overwatch agents. She commented that they'd been out of touch for too long; an assessment that Winston agreed with. Tracer was in East England at the time. [12]

A few hours after her talk with Winston,[13] Tracer was present in King's Row, as Shambali leader Tekhartha Mondatta addressed a joint human-omnic crowd. She came to suspect there would be an assassination attempt, which would be correct and she confronted Widowmaker among the rooftops. The two carried out a run and gun battle, but despite her efforts, Widowmaker successfully assassinated the omnic. Enraged, Tracer tackled Widowmaker, demanding to know why she had done this. Chuckling, Widowmaker easily incapacitated her and departed in a Talon aircraft.[14]

Widowmaker and Reaper attacked a museum dedicated to Overwatch, trying to steal Doomfist's gauntlet. Tracer fought them alongside Winston and the villains were forced to retreat. Tracer complimented two young boys that had helped her in the aftermath, commenting that the world could always use more heroes.[15]

During the winter holiday season, Tracer sought to pick up a gift for her girlfriend, Emily in King's Row. After blinking to numerous stores, Tracer was unable to find a gift owing to stores either being closed, or in one instance allowing another patron to keep a scarf that they were about to purchase. Ultimately, a small girl gave Tracer a gift and thanked her after she retrieved her family's stolen gifts from a thief earlier that night. Arriving home, Tracer gave the gift to Emily, which to her surprise was the scarf she sought to purchase earlier. Emily loved the gift, and the two kissed. Later, Tracer and Emily went to visit Winston for dinner at Watchpoint: Gibraltar, who was about to spend the holidays alone with Athena. Tracer then reminisced about the events of the past year, and had a good feeling about the next one.[16]

Alongside Winston, Bastion, and Torbjörn, Tracer saw an ad for Blizzard World. Declaring that she couldn't wait to get on some of the rides, she zipped off.[17] 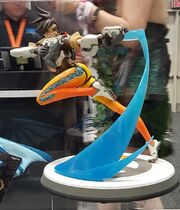 Tracer originated from the playable Jumper class in the cancelled Project Titan. During the initial pitch for the project that would become Overwatch, the Jumper was invisioned as wielding machine pistols and time bombs, and had the Blink and Recall abilities.[25] Most of the concept work on the Jumper was male. This signaled a shift in game design, as while the classes of Titan were player characters, the characters of Overwatch were intended to be distinct individuals. The Jumper was thus made female and given a backstory.[26]

Tracer conceptually began with the idea of a hero that blinked across the map.[27] She was one of the first three heroes developed for the game, alongside Reaper and Widowmaker.[28] According to Chris Metzen, Tracer "was one of the first characters we really got to know." While not created for a starring role, the development team warmed up to her. Metzen has likened her to Spider-Man.[29]

Currently, Tracer is the 'mascot character' of Overwatch,[30] and its centerpiece hero. She has been called the "Rosetta Stone" of the game. Her design used to include a jacket.[31]

Jeff Kaplan stated that the decision to announce Tracer as a lesbian in the holiday comic was considered carefully by the Blizzard team. Kaplan stated that the team wanted to portray Tracer's sexuality in a realistic and non-pandering way that was respectful of the character and tied into her story; not just "checking a checkbox on a list." Kaplan also stated how the team was aware of the negative backlash the announcement was bound to receive owing to Overwatch's global popularity, and how the subject was difficult to talk about and could bring up legal troubles in some countries. Russia banned the comic from appearing on Overwatch's Russian website in accordance with federal law.[32]