From Overwatch Wiki
(Redirected from USA)
Jump to: navigation, search

The United States is a geo-political entity that continues to exist in a post-Omnic Crisis world. Transcontinental train cars run across the country.[1] The American Southwest is a fairly lawless area, where various gangs spend their time robbing trains and carrying out bank heists.[2] 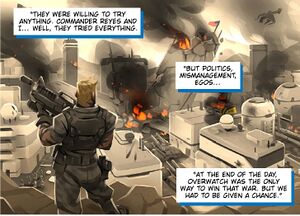 The US during the Omnic Crisis

When the Omnic Crisis hit America, the country was willing to try anything to win the war.[3] Consequently, the United States ran the highly classified but widely acknowledged "soldier enhancement program." Controversial, the program utilized pharmaceutical[4] (among other means) to create "perfect soldiers" blessed with superhuman speed, strength, and agility.[5] Ultimately, politics, mismanagement, and egos left it to Overwatch to finally win the war.[3]

After the theft of a pulse rifle from the abandoned Watchpoint: Grand Mesa, the US conducted efforts to apprehend the intruder.[6] Atlas News reporter Olympia Shaw believed that this intruder was also responsible for previous bombings of corporate offices and financial institutions within the United States.[5]

The following locations are grouped on a by-state basis:

The US as depicted on a tactical map