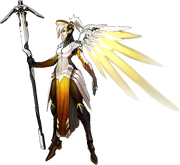 The Valkyrie swift-response suit is the personal armor of Dr. Angela Ziegler.[1]

The form-fitting suit was created by Ziegler while she was a member of Overwatch, as she sought to leverage her work for healing in frontline crises. The suit's armor components were crafted by Torbjörn Lindholm The suit remained in her possession even after leaving Overwatch.

The suit is equipped with biometric locks, a breastplate, a communications and scanning visor (its functions include the ability to monitor vital signs of other humans), a handheld scanning module (able to check for broken bones in a patient), biotic charges, and a propulsion system. Each component can be separated, making the suit easy to transport. It is quite heavy to wear, but also boosts Ziegler's strength.[1]