Ecopoint: Antarctica is an Arena map in Overwatch. It is used for Arena based gamemodes and its Winter Wonderland variant is used for Mei's Snowball Offensive

Maintained by Overwatch, the ecopoint served as a monitoring station for the study of Earth's changing climate.

Disaster struck the station when it was hit by a polar storm,[1] damaging the station's solar array.[2] Cut off from the outside world, the scientists were left stranded in the damaged facility. As their supplies dwindled, they entered cryostasis in a last-ditch effort to survive until a rescue attempt could be made.

Rescue came years later, but Dr. Mei-Ling Zhou was the only survivor. By this point, Overwatch was no more, and the eco-watchpoints had ceased to operate.[1] Mei left the base after receiving a recall order from Winston.[3] 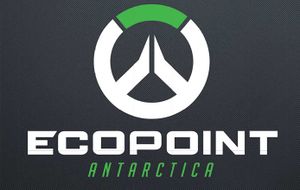 Like all elimination maps, Ecopoint: Antarctica contains no health packs. Other maps with no health packs include Necropolis, Black Forest and Castillo. The map is modular, with six core habitat modules. These are as follows:

The base also featured a helipad and radio tower. The helipad's copter was frozen over because of the storm, and the radio tower damaged as well.[3] 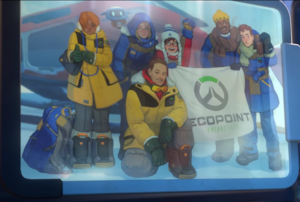 The base's staff consisted of the following: